Over the past decade, aggressive search tactics for walleye have been trending across many fisheries, particularly large bodies of water where the sheer acreage can be daunting.  The lures combine with the mobility and mentality which allows anglers to cover more water.  Rattle baits, flutter spoons and swim lures can all be effectively used to find walleye and finding fresh fish is half the battle.  One key element of breaking down water and finding fish through the ice is making sure that the fish can also find you.

This aggressive style of fishing isn’t just snapping or ripping a lure to trip an aggressive reaction from a fish.. which sometimes happens.  More importantly, you increase the amount of water you cover because fish can see you and react to you from much further away.  A high lift with a flutter spoon for example might pull fish in from twenty feet away or more.  A hard pound with a rattle spoon might create enough noise, flash and water displacement to pull fish in from several feet away.  Ring the dinner bell.

So often however, there is a difference between finding fish and catching fish.  Typically, the methodology of covering water and eliminating dead water to find fish is a matter of sampling as much water as possible with the time allotted so you can spend as much time as possible where there are fish.  As a rule of thumb, some of the first walleye you pull off the spot can sometimes be the most aggressive fish… if you are fishing through fresh ice.  As you pull a few fish off the location, the fish typically get less aggressive.  The longer you wear out your welcome on a spot, the harder the fish get to catch.  This decline in productivity often aligns with less competition.  When fish are competing against each other to eat, these fish make you look good.  When there are fewer fish on a location, there is less competition.  Fishing pressure plays a huge role in how fish react to you.  So many of these aggressive search and destroy tactics have originated and shined on large bodies of water because they allow you to stray away from the fishing pressure and allow you to find your own fish.

As you move from search mode to catch mode, we are typically forced to make a lot of adjustments.  These adjustments could be as simple as adapting to a fish on the screen in that we are often fishing much differently when we are not marking fish.  When we are not marking fish, we are playing the lure so that we can hopefully reach distant fish.  When a fish shows up, we often have to change the cadence to trigger the fish. 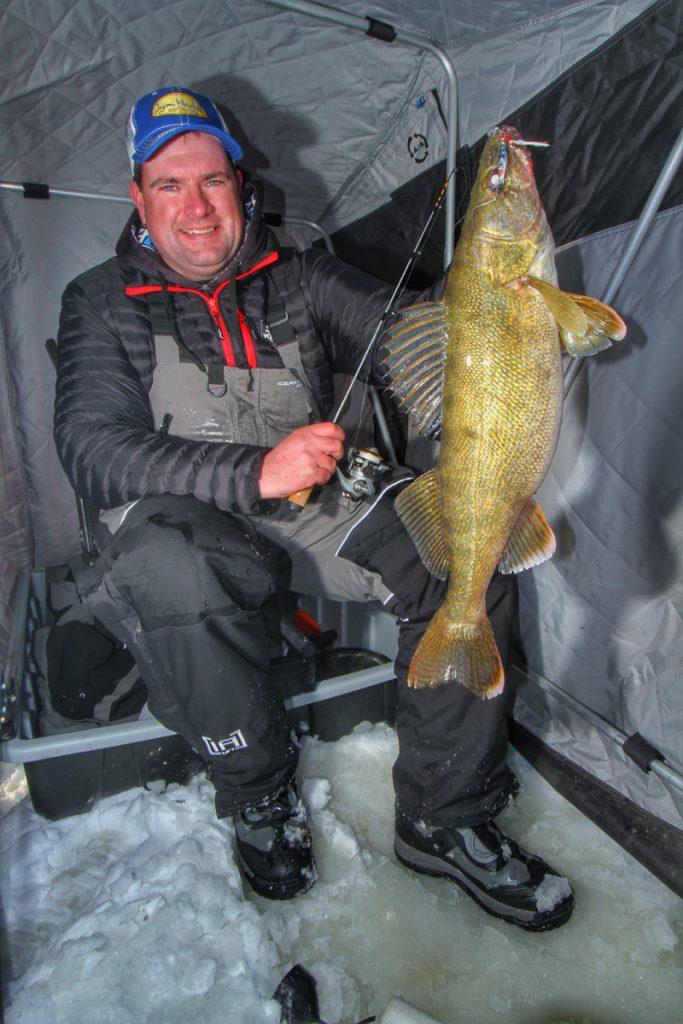 Knowing when to change up your cadence and how to react to fish you see on the Vexilar separates great anglers from average.  So often as walleye come in on the presentation, they stall out as they reach the lure.  If a fish lunges at the bait and misses or overshoots the lure or if a the presentation falls behind a stalled fish, the lure disappears and this is the worst thing you can have happen when trying to trigger a fish.  These fish basically drift off swimming away from the lure unless they turn around and turning around a fish that is facing away from the lure and getting a second or third chance only happens when the fish are on.  When the mood is mediocre, you don’t get to screw things up.  You get one chance.  When a fish comes in hot and than just disappears, so often  the fish simply overshot the lure and missed.  Often the best way to turn around a fish is to raise the lure and pound the lure hard enough to where they can feel it.  Your cadence has to become aggressive again but in a tight window.

Higher lifts create a lot of flash and can be seen from further away but they also create the greatest risk of swinging out and falling behind the face of a fish when they get close.  Usually, lifting a spoon up four feet and dropping it down fast is not a good move when there is a fish on top of you.  The triggering moves become tighter and you want to keep the lure in front of the fish, you don’t want that lure to disappear.  So often however, many anglers at this point don’t do enough and the fish don’t react to the lure.  Most of the time, we have to keep the lure moving.  Stops and stalls will definitely trigger fish but they are usually momentary moves that follow movement.

One of the greatest and most common mistake many anglers make when attempting to trigger a walleye with a lure is letting the lure settle too much between strokes.  Imagine a jig stroke and than the lure settles to the bottom of the stroke and hangs.  The longer the lure hangs, the more the lure turns.  On the next stroke, the lure comes off a different direction and this direction is unpredictable.  One second the lure is six inches in front of the fish and than the lure shoots towards the fish disappearing… game over.  Here’s a little secret that will help you catch a lot more walleye this winter.  Don’t let the lure settle at the bottom of the jig stroke.  Start your up stroke before the lure settles so that the lure dances and the cadence and direction of the dart or swing becomes locked in to one direction and becomes predictable.  The target becomes much easier for fish to hit.

Remember that walleyes don’t back up that well and they need room to turn around, this is why staying in front of the fish is so crucial.   This is perhaps the most important reason for changing the cadence and adjusting the lure as the fish closes the distance.  This is why finding fish can be different than catching fish.  The moves that pull fish into the cone angle from twenty feet away often have to change as a fish gets close and this understanding of how to use tempo and cadence to find fish while reading your electronics to adapt and trigger fish will help you catch a lot more walleyes this winter.