Many ice anglers covet big panfish.  What constitutes a big bluegill, sunfish or crappie can vary across regions and can depend on the angler, water and year.  Some lakes only seem capable of producing bluegills that max out at eight inches.  Other lakes rarely ever produce a crappie over twelve inches.  There is no secret ingredient for success that will change what swims in a lake.  Rule number one is to fish water that has big panfish.  If you want to catch big panfish, you have to fish water that is capable of producing big panfish.  Factors that seem to have the most limiting factor on panfish size is angler harvest and predator prey imbalances.

Population structure has an enormous effect on overall strategy for ice angling.  For example, winter kills often produce big panfish about four or five years later.  What typically happens is the lake dies off, anglers forget about the lake and the few fish that survive compete with fewer fish.  If you are dealing with one size class of fish or fish that have grossly large body condition resulting from few fish and too much forage, the strategies are completely different.

Dare say however that what most ice anglers deal with on most lakes is something completely different where the fishery has a very robust panfish population but… only a very small percentage of fish are the largest or top end size.  Many fisheries might consist of numbers of five to seven-inch bluegill for example with perhaps five percent of the fish measuring over nine inches.  This type of fishing is obviously a numbers game where the more fish you catch, the more likely you are to encounter the largest fish in the system but ice anglers can also improve the odds dramatically by specifically targeting the largest fish.

Higher than the Clouds 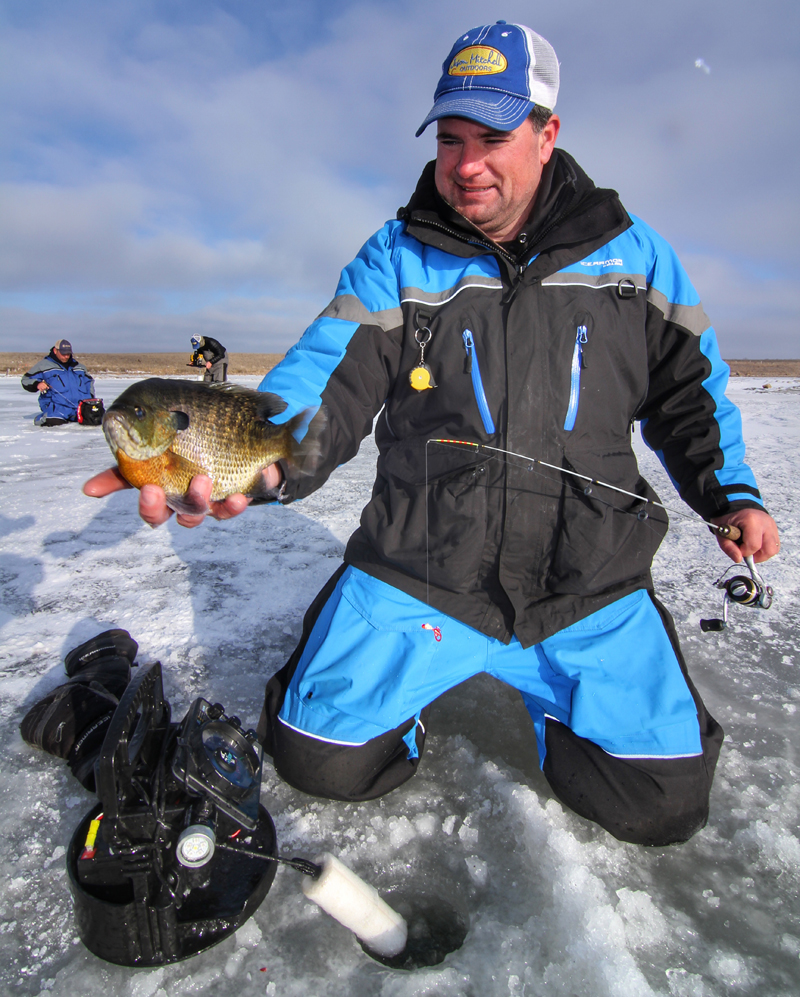 Ice anglers often spend a tremendous amount of time locating schools of panfish assuming that the more fish are below you, the greater the odds of bigger fish being present.  This assumption is often correct in that in a pack of a hundred fish, there are often a few outliers that are bigger.  This mob of fish however can consume you.  The hardest thing in the world can be leaving biting fish.  A strategy that has worked so well over the years for targeting the biggest panfish in the school is to fish high above the pack and force the fish to rise in the water column.  If you drop right down to the pack, you are going to have to catch an enormous amount of fish before you find the fish you want if you are targeting the larger fish.  What I so often find is that the largest fish in the school are typically dominant and most confident to leave the security of the pack.  If there is one fish in that school that will rise five feet higher than the rest, it is often the largest fish in the pack.  Fish high above the fish and force the larger fish to rise from the pack.  Four inch bluegills will quickly dart up and dart back down because they don’t seem to like being alone and silhouetted.  Bigger fish will rise higher and stay above the pack for longer periods of time.  When fishing basins and channels where panfish typically suspend over deeper water, larger profiles often shine because fish can see the presentation from much further away and separating fish by how far they will rise is one of the best strategies there is for sorting out the largest fish from the rest of the school.  Realize as well that when you start fishing high above a school of fish, you will get fewer bites and catch fewer fish but you will often catch the largest fish.

Because of the effectiveness of this high sorting strategy, we often upsize the profile or size of our baits by using soft plastics.  Larger profiles like the Maki Plastic’s Jamei and Draggi can be seen from further away which means that you can lift fish higher in the water column from greater distances.  This distance often separates the big fish from the small fish. 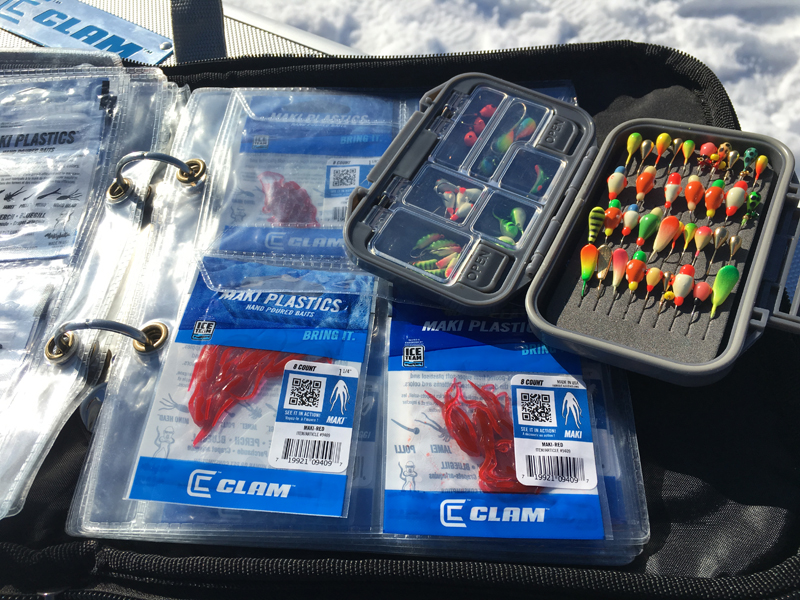 Larger profiled jig and soft plastic combinations fished high above schools of panfish will often account for the larger fish in the school.

The second factor is to keep moving and hitting fresh fish.  If you sit over the same hole for any extended period of time, you can quickly wear out your welcome.  When you see the fish size drop off in a hole, move.  Now if you sit over a hole long enough, fresh fish can recharge a hole so patience can sometimes work but what I find is that drilling more holes and fishing new water is usually best because you can always rest your old holes for a half hour or so and simply let that hole load up with more big fish.  I find that I can sit over a hole and pick away at fish where the rate of catching nice fish might be a handful an hour… or I can bounce around to several holes and go back to the hole described above and still catch the same number of nice fish, just in a much shorter window of time.

Knowing when to give fish a rest and look for new fish is often what separates great ice anglers from the rest.

Day in and day out, people who find fish catch the biggest fish.  In the dynamics of a school of fish, the biggest fish are often the dominant fish in that particular school.  The biggest fish often eat first and eat the most.  The little fish often don’t get to eat until the big fish are done.  Guess who gets caught first?  Community holes are often very difficult to catch the largest fish unless you get to that spot first.  You see it every winter, the first people on the ice during the early ice period catch some nice fish and then the size of the fish drops off through the winter on community spots.  If you want to catch the largest panfish beyond first ice, find fish that are not using the community spots.  Might mean finding an unassuming lake that doesn’t have a reputation or is difficult to access.  Might mean looking for a secondary basin or figuring out the small details like an inside turn or soft bottom point that anglers overlooked.  Don’t overthink fishing however, success is often simply leaving the pack and drilling holes over fresh ice.  Simply moving fifty yards away from the crowd can often produce a nicer class of fish.  As a rule of thumb, some of the first fish you pull off a location will often be some of the nicest fish.

Anglers who have a knack for catching bigger panfish through the ice typically have a lone wolf mentality.  They put in the work looking for fish and cycle through fish on fresh spots.  This winter, get confident in blazing your own trail and adapt your presentation to upsize your presentation and fish well above the pack.  This combination of location and presentation will increase the size of the panfish you catch dramatically on fisheries where there is a substantial amount of fish with only a smaller percentage of fish being on the upper end of size.