Trophy pike have always fascinated me.  While pike are indeed abundant across the upper Midwest and beyond, trophy pike that surpass the thirty-five-inch mark can be much more difficult to find. Trophy class pike don’t live everywhere and not every fishery can produce big fish but few fish get me as excited as big pike.  Right now, in the Midwest, some of the best big pike fisheries include Lake of the Woods and the Missouri River reservoirs; Lake Sakakawea, Fort Peck and Lake Oahe.  Upper Red Lake, Devils Lake and other fisheries are also noteworthy but of course the key to finding trophy pike is to fish water where they live.

Where To Target Trophy Pike

The classic big pike opportunity takes place at late ice where big fish concentrate in creek arms or in front of incoming tributaries.  Much of this late ice fishing is relatively shallow, often less than ten feet of water.  Many fisheries however do offer a crack at trophy class fish through midwinter.  We often find big pike using prominent main lake structure and rock reefs through January and February.  On Devils Lake where we live, we find a lot of big pike on primary points in depths between eight to twenty feet of water during the middle of winter.  On Lake of the Woods, we have caught big pike off rock structure.  In the big reservoirs out west, the primary and secondary points leading back into the larger bays often hold pike through the winter.  Point being is that you don’t have to wait until late ice to target and catch big pike.

You can target and catch pike a lot of different ways including jigging with soft plastic swim baits, glide baits or spoons.  If big pike are available in a fishery, there is a good chance that you will have some incidental encounters while fishing for walleye and other species.  For specifically targeting big fish however, nothing beats a spread of tip ups for simply catching fish.

The number of tip ups allowed per angler will vary from state to state but use as many tip ups as you legally can.  Spread the tip ups out as far as you can legally tend.  There is an adage that big baits often catch big fish and that often rings true with pike.  Large frozen dead baits like smelt, herring, cisco or anchovy can work extremely well and often work better than any live bait.  Bait sizes might range between six to thirteen inches long.  Live sucker minnows and creek chubs can also work well for big pike where legal and live minnows will also get you more incidental big walleye catches over time however we have caught some huge walleyes over the years on frozen dead baits rigged and fished for pike.

How to Rig Tip Ups 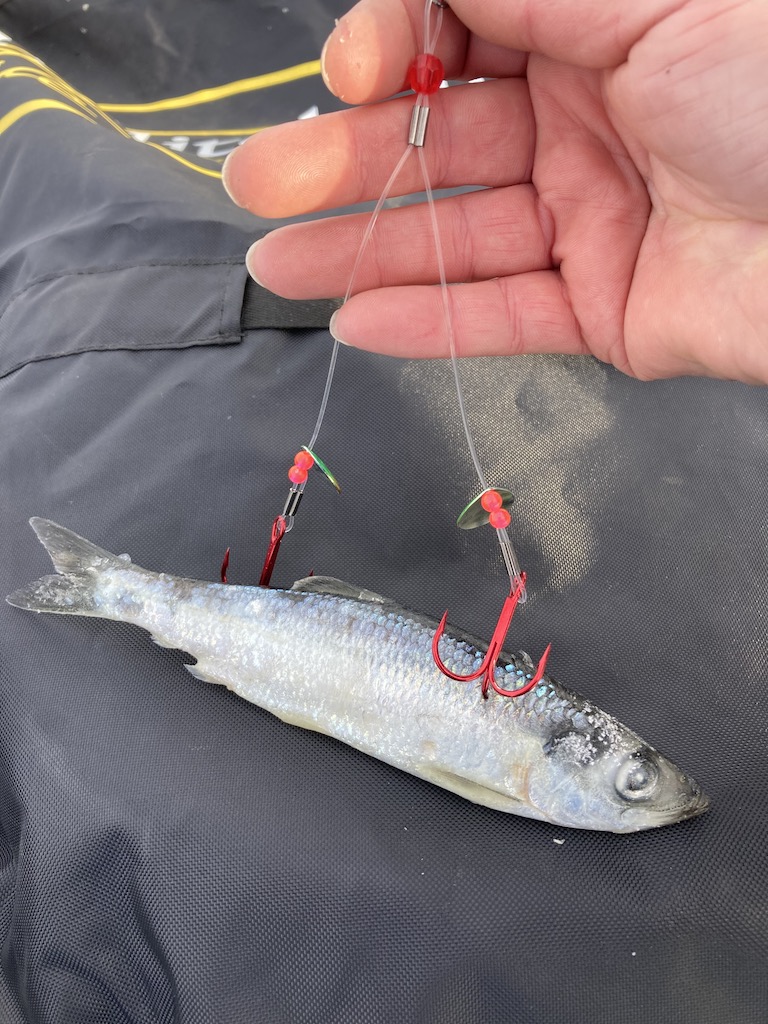 For rigging tip ups, the classic black Dacron line I find still works best as I don’t like the memory or stretch of the plastic-coated lines.  Heavier test like forty-pound rolls off the spool easier and doesn’t bite into itself or cut into the bottom of the hole as much when handling a big fish.  Go heavy on the Dacron and make sure all your components are heavy duty.  Use heavy duty swivels and some type of quick strike tandem treble hook rig that should match the size of your bait.  Over the last five years, I have been using heavier fluorocarbon much more and gotten away from steel or titanium leader material.  I find that a spool of forty-to-sixty-pound fluorocarbon is much cheaper and easier to tie our own rigs with.

Where to Place Tip Ups

When analyzing structure and spreading out tip ups, the best strategy I have seen is to fence off structure.  Run your tip ups in a perpendicular line across the structure so that each hole covers a different contour or depth.  If a pike moves across a piece of structure, it swims by a bait.  We seldom follow contours but will move tip ups and slide them across the structure shallow or deep as a pattern develops. 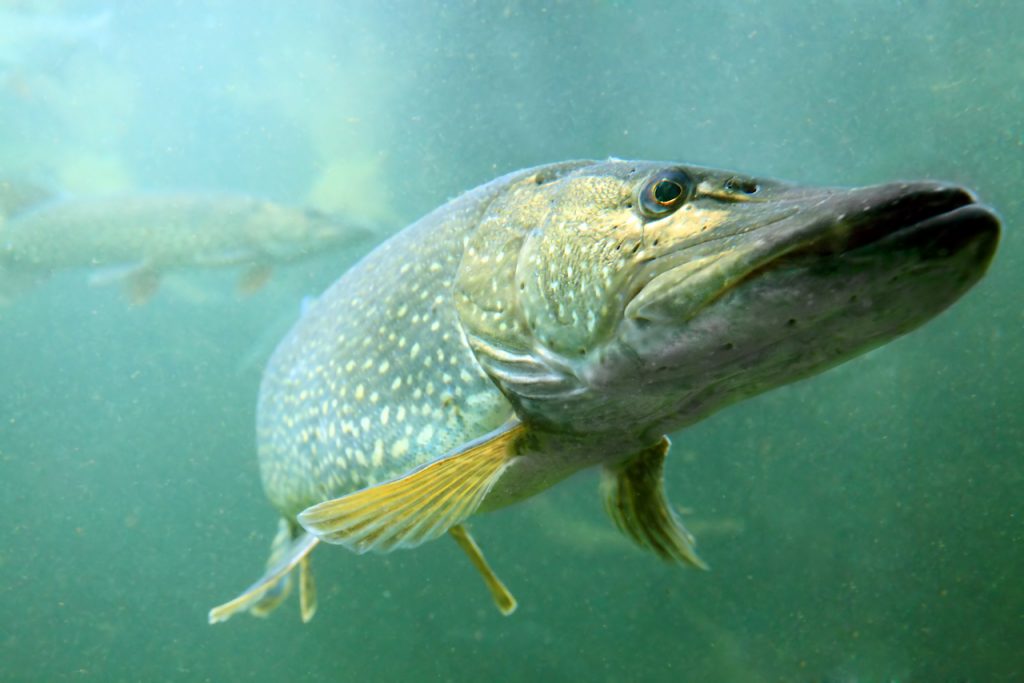 Especially for waiting out big fish bite windows, you sometimes need some patience.  Overall, mornings and evenings often see more intense activity but that big bite can happen anytime during the day.  Of course, compared to walleye fishing and many other ice fishing bites, pike are notorious for moving and biting anytime during the day.  What always amazes me is watching these windows occur in a large spread of tip ups.  You can have an hour of inactivity and then have a flag pop.  Sixty yards away and less than a minute later, another flag pops up.  The impact that weather along with majors and minors with moon position becomes much more apparent when surveying multiple tip ups spread out over a large area.

An Affordable and Effective Option 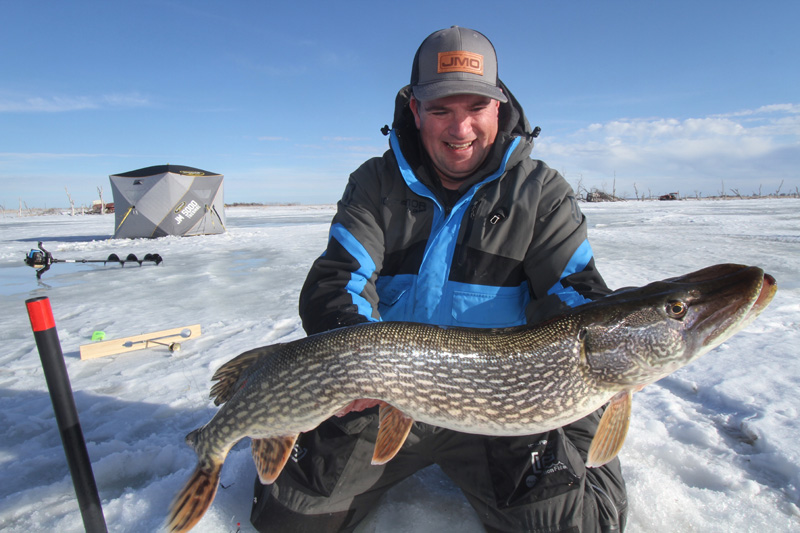 The classic spool below water tip up design that features a lubricated spindle has been around for an awful long time and nothing has really changed or drastically improved on this design for over thirty years.  Chances are, you might have a bucket of tip ups in the garage.  If you don’t own any tip ups, tip ups are relatively cheap.  Even though tip ups might be considered old school with some ice anglers, don’t discount the fun or effectiveness of this fishing style or method.  Especially if the target is big toothy pike, there are few things more deadly than sitting on key locations with big dead bait.