Of course, there are all kinds of variables like wind pushing upstream and velocity of current.  There were of course other variations like slowly dragging a jig upstream or long lining a smaller jig as you slipped down stream.  All this stuff has been done an awfully long time by a legion of good river anglers and all this stuff still works extremely well.

If there is one big change we see today however, I would say that the new bow mount electric trolling motors have completely changed the river fishing game.  Anchoring just right on a current seam or eddy is an art itself.  Knowing where to put the anchor and understanding how much rope to let out and where to tie the rope off on the boat so you could be pinned down in the perfect spot took a little bit of experience and savviness.  The spot lock features on trolling motors have gotten so good today that you can pin yourself down in one spot by simply hitting a button.  Spot lock has given more anglers great boat control.  The other aspect of todays trolling motors that sure have made river fishing much easier is the speed control where you can set your speed as you crawl upstream.  Because of the speed control and autopilot features, we are spending a lot more time dragging jigs upstream versus slipping with jigs downstream. 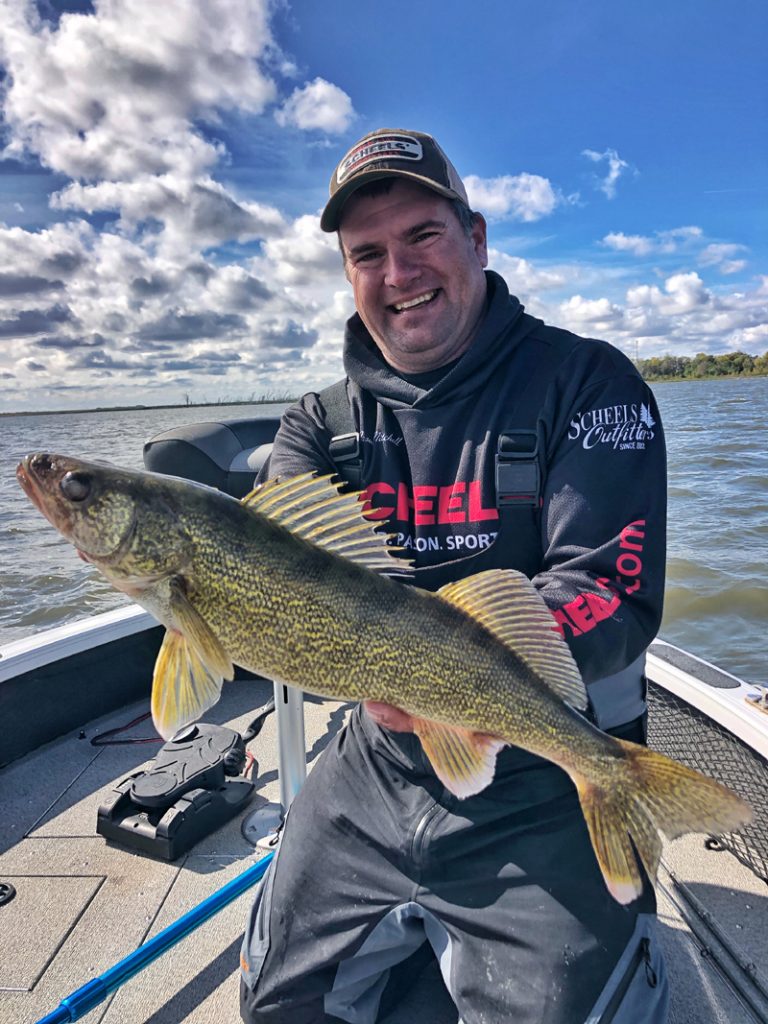 Dragging jigs upstream is a deadly tactic for catching river walleyes each spring. The author Jason Mitchell poses with a great walleye.

When you drag upstream, there is no magic speed but you can feel the good current seams by what the trolling motor must set at to maintain upstream momentum and course when using the remote.  If you can crawl upstream at .4 miles per hour on the four setting for power, you are in slacker water.  If your remote shows you that you are on the seven or eight setting to move upstream at .4 miles per hour, you have probably slid out into too fast of water.  This is just a generality as the velocity of current can be different on varying rivers but the point is that you can feel the sweet spots with your trolling motor.  This is especially important if wind is blowing against the current and hiding the obvious surface signals.

What I have found is that so often, dragging upstream with jigs and particularly plastics is not only effective but more efficient than slipping downstream.  Twenty years ago, I would bet that eighty percent of my river fishing was slipping down stream or anchoring in a sweet spot.  Today I am dragging upstream much more or pitching in conjunction with spot lock.

I believe part of the effectiveness of dragging plastics against the current is that you can error on the side of heavy with your jig and maintain that bottom contact through the ebbs and flows of current velocity.  The reality is that fish move out into faster water all the time and there are many situations where the current is faster on top but there are seams and breaks next to the bottom where fish can hide.  Many sand bottoms have troughs and dips for example.  Other river bottoms have that classic saw tooth bottom where fish can hide out of the stronger current.  You can often drag upstream much slower than slipping downstream and through the day of fishing, it is simply easier to keep your jig in front of fish by erroring on the side of going heavier upstream.  Simply efficiency.  You simply stay in the zone better when you slide out into faster water.  Every fish you catch on that faster side of the seam is a bonus fish that you probably wouldn’t have caught had you been slipping.

I won’t say that plastics always out fish live bait like minnows as I have seen instances where fish simply wanted meat but most days on most rivers, all I use is soft plastics and feel that I catch more fish day in and day out with soft plastics.  Again, simply efficiency.  Soft plastics are durable and stay on the jig for several fish.  You can manipulate the profile, action and color.  I also believe that river fish must make up their mind quick when something moves by in the current and there isn’t a lot of examination.

I catch a lot of fish dragging jigs and soft plastics on rivers each spring but there is also a great argument for pitching jigs and plastics and with spot lock features on trolling motors that just keep getting tighter and better.  Pitching jigs is deadly for reaching fish in shallow water.  In some regions, you will see a lot of boats on a river and not that many people casting.  I like casting or pitching jigs because I can hit spots at angles that other boats often miss and of course there is nothing better for hitting a shallow spot.  Would dare say that I often catch some of my biggest fish on rivers each spring by pitching shallow.  Could be shallow sand and timber spots or clam beds.  Could be rip rap.  We catch some big walleyes each spring in less than four feet of water.

Invariably, what some of this new equipment does is narrows the gap in boat control.  Used to be a handful of anglers who had extremely good boat control skills catching most of the fish on rivers each spring while many people struggled to control their boat.  Today, the gap is much tighter and the average angler fishes much more effectively because they simply have much better boat control.  At the end of the day, catching more walleyes this spring often boils down to efficiency and keeping your jig in front of fish.  There is no doubt in my mind that you can become a really good angler in a much shorter time today because of the tools that are available.