A new season of optimism awaits.  In many states, the inland walleye seasons open in May.  Even in states where there is no closed walleye season, the kickoff on many natural lakes and some reservoirs begins in earnest during the same time.  What has always amazed me is how patterns and locations can sometimes vary from year to year.  No two years are quite the same.  Ice out dates flux, surface water temperatures can vary and seasonal weather patterns can be all over the board.

Looking back, I can remember one specific year when we could get on the ice in early May.  There have been other years where we were bundled up in boats, finding fish in over thirty feet of water.  Of course, there have also been times when we found fish shallow.  Nothing surprises me anymore but there is often a method to the madness.  The following are a few observations.

So often when we look at early season walleye fishing, much of the talk revolves around finding fish using shallow water.  Shallow water is warmer and finding walleyes early in the year often revolves around water temperature but there is a big exception.  Traveling fish often run deep and unstable weather along with wicked cold fronts that crash water temperatures will also send fish deep.  Whenever environmental factors cause fish to move multiple miles, these fish often follow the deeper contours as that is often the least amount of distance to travel.  Especially during periods of frigid and brutal weather, don’t be afraid to look deep and fast forward ahead to locations offshore that you wouldn’t expect to catch fish until much later into the season.  Speaking from experience, it took me many years to learn that lesson. 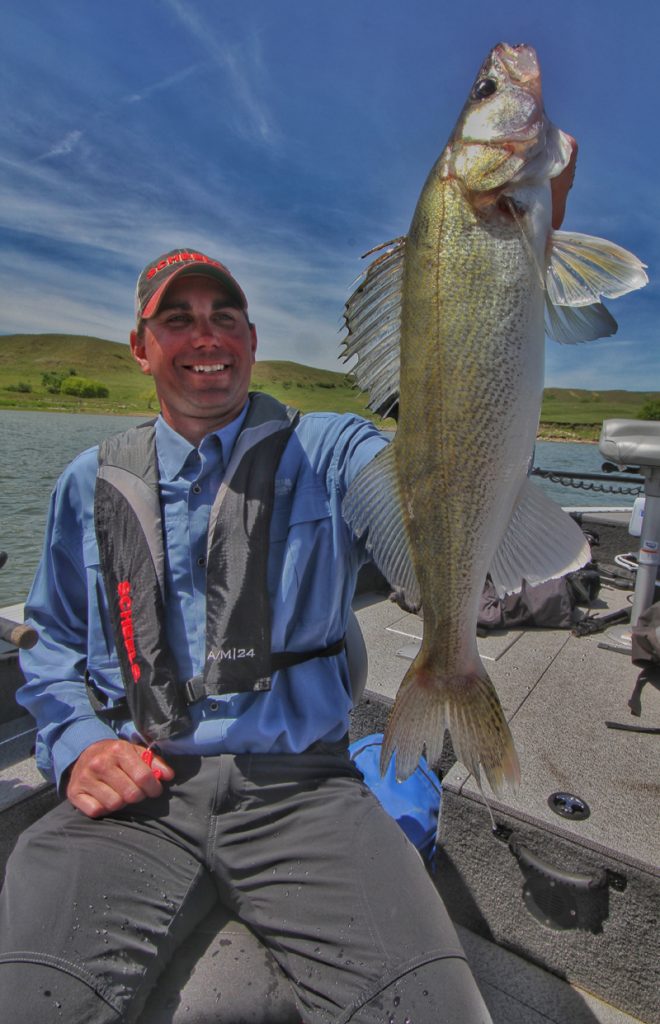 Early season tips for finding walleye this spring on natural lakes and reservoirs. Focus on the warmest water you can find during stable weather.

Steady progression of rising water temperatures and stable weather typically sees the classic patterns unfold on many fisheries and this predictableness works in the angler’s favor.  Each body of water has a unique personality.  On some bodies of water, the norm would be to find walleyes relating to 15 to 20-foot gravel bars while fifty miles away on a different body of water, you might anticipate fish in five to ten feet of water along emerging weed lines.  On big bodies of water, find bays and other protected pools of water that are warming up at a quicker rate.

Look to see if wind is stacking warmer water along a shoreline.  Big water often demands finding these pockets of warmer water which can make these larger bodies of water more challenging.  Because water temperature can be so important to early season success, a tried and true strategy is to focus on smaller and more protected bodies of water that are a step ahead in warming up.  You can sometimes fast forward by a week or two into the biological clock by shifting to smaller lakes.

As a rule of thumb, cold water is usually much clearer.  As the water warms up or get churned up by wind, the water will develop some color.  This stain in the water often coincides with water temperature.  Too much wind can hurt some bites when the water begins to get turbid from wave action but some color or stain is usually good.  Look into the water with polarize glasses and gauge the visibility.  A good general rule of thumb I like to use for starting out on a lake is to double the depth that I can see.  If you can see down to five feet, start fishing in ten feet of water.

This rule of thumb often gets me pretty close most of the time during stable weather but of course there are always exceptions especially in regards to what we discussed earlier… wicked fronts carrying a lot of wind that crash water temperatures and send fish deep.

So often, many anglers assume that they must fish slow and methodically early in the season.  In fact, on many bodies of water, many anglers will be slinging a rig or perhaps a jig.  Don’t always assume that time of year or water temperature dictates the presentation.  If fish are clumped on a small location or holding on a “spot on the spot,” use a presentation that can be surgical like a jig or live bait rig.  If fish are fanned out over large spots like channel edges or flats, don’t be afraid to troll crankbaits or even a spinner harness.  The key to catching fish is matching up the presentation to the location so that you can efficiently fish through the spot.

Let the location dictate the presentation regardless of time of year. Fish scattered along creek channels and deep flats can often be caught with trolling tactics that cover water.

Typically, on most fisheries, there will be several patterns happening and this variety of location types and patterns is further exaggerated by the fact that walleyes will typically be just wrapping up spawning come May.  Thus, anglers can often target male walleye that continue to linger in current and hard bottom areas.  Classic spawning locations like bottle necks, rip rap areas and rubble or rock shorelines often hold male walleyes for an additional month at times… long after the females vacate these locations.

In reservoirs where fish will sometimes move several miles during this time of year, a population of fish can often be found deep as they follow the edges of old river channels.  As the water temps continue to climb, post spawn females will often slide up onto shallow sand flats to warm up.  Because these productive patterns and locations can often be a moving target, don’t get affixed to just one pattern or type of location.  Be flexible and take samples of different locations and patterns until you get into the groove.

Because of the amount of distance some fish move or travel during the spring, there are different populations of fish living completely different lives on most top walleye fisheries.  Some fish won’t travel far over their entire life while some fish put on several miles.  As a rule of thumb, fish that have not been traveling great distances will have darker and more robust coloration while fish that put on a lot of miles appear pale and washed out.  Fish with the dark and robust colors have been hanging out in the same location while the paler fish are transition fish.  Both fish can be targeted and caught but having that understanding and grasp of what these fish are doing can make you much more attune to the patterns.

Note that on some fisheries, the fish are constantly roaming, moving and on the go and are typically always pale.  Each body of water also has its own characteristics as some lakes produce green and gold walleyes where as other fish look almost black depending on the water in which they live.  On many fisheries, however, you will have what many would consider a normal looking walleye and then there are much paler fish.

Some anglers believe that shallow fish get darker coloration and deeper fish get pale and this change in color is a result of sun penetration.  My personal believe is that this change in color is caused by slight stress.  You can take a dark colored walleye and put it in your live well with the lid open and so often, the fish will lighten up in color within an hour… caused by stress.