Attention to detail combined with the right strategy can result in more and bigger panfish. Bull nosed bluegills and crappies big enough to cover a dinner plate are prized by anglers across the ice belt. To catch big panfish, you have to obviously be on water capable of producing big panfish but beyond fishing the right water, many of the great anglers I know are all masters of presenting a jig or bait by being in the right place at the right time so that they get bit by big fish.

Targeting big panfish effectively takes a combination of factors working right. You can have the best presentation for example but if you are not on the right spot, you will not catch that huge iridescent gill with the big bump on its head. So often for example, big fish location might not necessarily be a secret location or bay on the lake so much as paying attention to the details. Big fish are often mixed within schools of smaller fish or a stones throw away from schools of small fish. Often is the case, understanding how the bigger fish are positioned within a school or how the bigger fish are relating to the cover is the key to sorting out the bigger fish from the school.

Typically, big fish dominate the school. On an aggressive bite for example, the bigger fish will often position themselves at the top of the school and get to the presentation first. The first few fish off a spot are often the biggest and than the size drops off. Some really good tournament anglers have done really well with this mindset. They move, cover a lot of ice and after the size drops, they just keep moving attempting to make contact with as many schools of fish as possible, cherry picking the biggest fish from each school of fish. 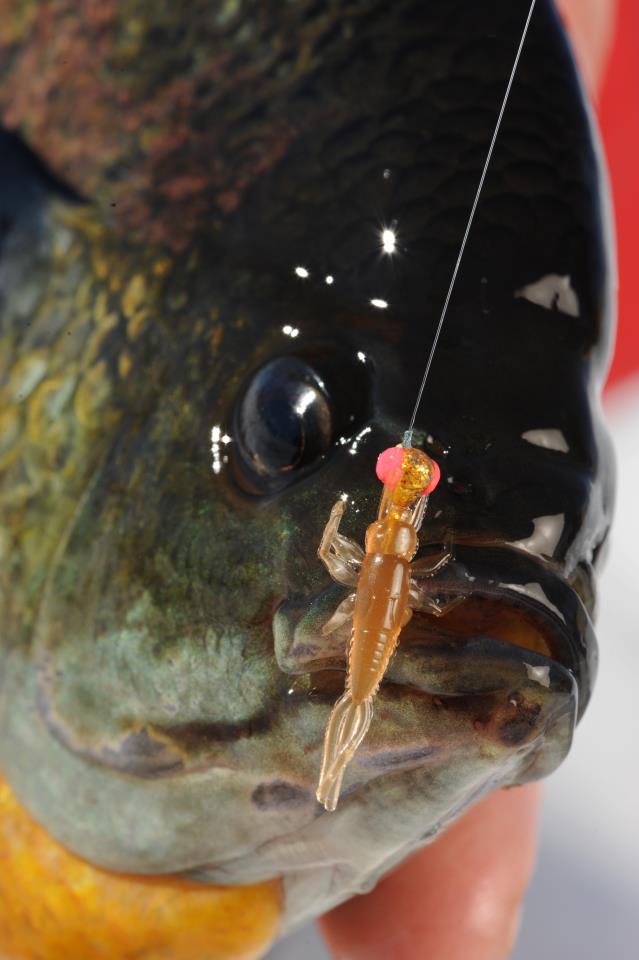 Both crappies and bluegills spend a lot of time in good weed cover if it is available. Clear lakes with good water visibility typically have good weed growth which focuses fish activity as long as the weeds remain green but even dead or dying weeds will hold fish if there is enough oxygen. Stained lakes typically don’t have good weeds so the bite is typically more basin or open water orientated where much of the fish location is focused on the break lines that transition to the softer bottom of the basin. Dave Genz has referred to these types of locations as sticky bottom areas for years as this bottom type supports a lot of bug hatches and invertebrates that key panfish location.

When targeting panfish in weeds, sun penetration and predators often dictate how the bigger fish are positioned within the weed bed. Ideally, early morning and late evening along with over cast days are the easiest windows to look for panfish around weeds because fish will often move up higher in the larger open pockets and open lanes and also move through the spots more. When the sun gets high, fish typically quit moving and hunker down into the weeds more. During the midday, an angler often has to drill more holes and get over the top of fresh fish. When fish are moving, you can sit on a good spot and new fish keep rolling through. When the fish sit, you have to keep rolling to contact fish by moving. Pike and sometimes bass however can push fish deep into the weeds regardless of the time of day. Panfish with a high pike population around them for example act completely different than panfish that are not running from predators. What I have noticed over the years is that when big panfish hold up in dense weeds, they are often holing up alone or in little groups of maybe two or three same sized fish. Often, the bigger fish take up residency in the best spots regarding cover. Sweet spots are often edges where two or three weed varieties intersect and form good overhead cover where fish can hide. When dealing with weeds during the day, cameras often shine because you can get a visual look of how the weeds grow and where the good hiding locations are. We often see the bigger fish holed up in the good cover and the small fish get pushed out into the open.

In summary, the biggest fish in the school rule the roost. Small fish eat or get to the bait first only after the big fish slide down to the bottom of the school. The bigger fish push the smaller fish out of the best locations in the weeds. By better understanding the school dynamics, you can identify or recognize how to target better fish on a spot. Once you understand what is happening underneath the ice, you can adjust your presentation accordingly. There are times for example when fishing high and picking off the top fish in a school results in the bigger fish. The next day might mean dropping through the school fast to reach a big fish positioned at the bottom and if you fish high, you get attacked by swarms of small fish. Early morning might see bigger fish dominating a particular weed pocket and pushing small fish away deeper into the weeds. Pike show up in the area and the big fish have pushed the small fish out into the open pocket and are buried in the best weeds. The target is moving and the dynamics of how these schools behave is changing hourly each day but by better understanding how big and small fish relate together, you can specifically target the bigger fish with more accuracy.