Have often heard not to fish memories.  When I look back however over my own fishing career, some of my greatest fishing memories involved trolling deep diving crankbaits over deep water.  So many situations from mid-summer on where traditional live bait locations and tactics just got tougher.  Situations where big fish were difficult to find until we put deep diving crank baits behind the boat and focused on deep contours or in some cases, suspended fish.

Of course, deep is relative but typically, we were often trolling over twenty to forty-five feet of water.  The popularity of snap weights, lead core and sometimes wire has changed the trolling game dramatically over the past twenty years.  As the summer wears on however, I still find myself going back to the big billed, deep diving lures that you can flat line down to deeper depths by just using thin diameter braided line.

Bigger fish especially, often prefer the larger profile and water displacement of a deep diving crankbait that has the mass and bill to dive to twenty feet or more.  A lure that can touch down in thirty feet of water simply moves much more water than a much smaller lure behind lead core or snap weights.

As summer progresses, we often catch many of our biggest fish trolling deep diving lures over deep water.  The types of locations we target can vary amongst different fisheries but typically we find ourselves contour trolling along some type of edge.  The edges of the old river channel are often the focus on the Missouri River reservoirs of Fort Peck, Sakakawea and Oahe.  Deep troughs like the Paris Trench are often great deep trolling locations on natural lakes like Leech Lake.  Pulling in and off the deep mud flats is a classic pattern on Mille Lacs.  Shipping channel edges are a classic location on Great Lakes fisheries.

Interpreting your electronics is crucial but there are some myths to what to look for.  The key is to find schools of baitfish on the location along with schools of larger predator fish that look like walleyes.  Catching these fish however is so often related to timing.  There are so many baitfish on some locations and what is surprising is that some of our best fishing often happens when we quit marking baitfish.

Imagine massive schools of smelt stacking up along a deep ledge for example.  Doesn’t take long for walleyes to show up.  What happens so often however is that the fish eat for a very intense window and become more difficult to catch.  Typically, bait fish that are getting pushed by predators will school vertically into balls.  If baitfish are spread out across the bottom, there are typically no predators pushing those baitfish.  Some of the best feeding windows however often happen shortly after the baitfish move or shift.  There is always a lag between predator and prey as the walleyes are often one step behind.  Whenever you can find fish still on a location as the prey starts to dissipate, you typically have a great opportunity, but that opportunity is good a short time and then it is gone.  The spot is dead the next day.  The moral of the story is don’t fret if you aren’t marking baitfish on a location as long as the baitfish were stacked in the location the day before.  When you are marking baitfish and predators, don’t give up on them and understand that the feeding windows are often short and intense.

These locations often ebb and flow and are often very effected by wind.  A lack of wind will set up a thermocline at a certain point and walleyes will often hang just above that.  Strong winds however can pull colder water up shallow on the leeward side of the lake and push warmer water deeper on the windblown side of the lake.  Some baitfish like ciscoes are notorious for stacking up along the leeward side of points of islands to avoid any turbulence.  Extremely strong winds can actually pull baitfish up into shallower water on the leeward side. 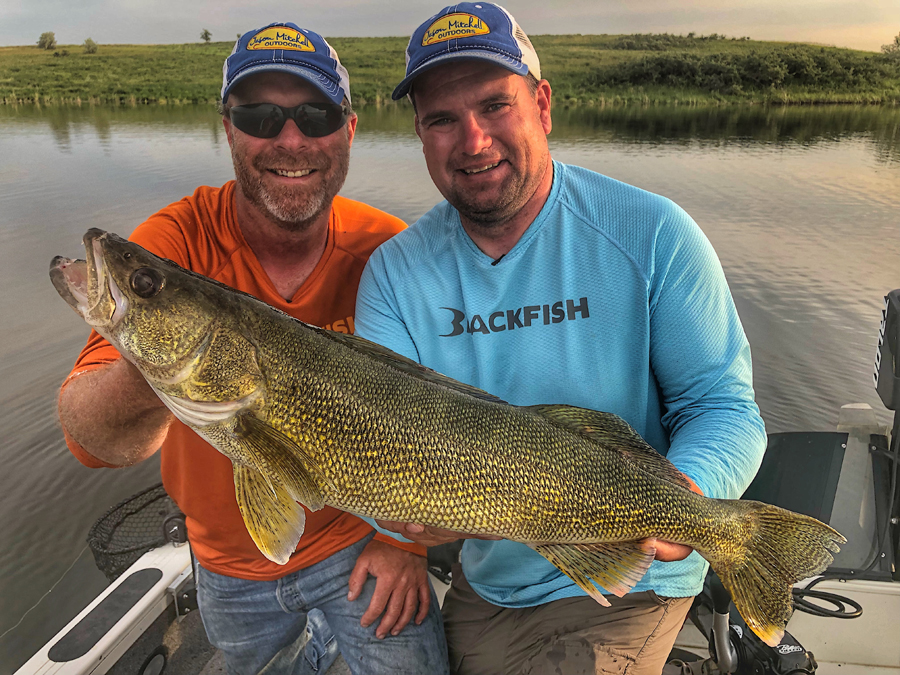 The deep baitfish patterns often see a bulk of the baitfish suspend over open water that has the favored water temperature.  As these baitfish collide with deep structure, walleyes often use these edges to pin down baitfish.  Walleyes will often roam over open water as well, but these fish can be harder to find consistently on some fisheries.  Over basins and bowls, focus on suspended fish but along channels and breaks, focus on the contour.  When fish do suspend off old river channels for example, they are often in close proximity to the edge.

In most cases, we are trolling multiple rods and often use planer boards to spread out lines and to cut a larger swath as we cover water.  I have always been a fan of the Off Shore Boards as they are simple, functional, handle a pretty good payload and I prefer their clips.

The classic lures include the Reef Runner 800 Series, Rapala Tail Dancer and the Bomber Long A.  All these lures catch fish but if you are looking for an absolute perfect deep diving crankbait that catches fish and runs perfectly true, the Salmo Free Diver is a lure you will simply fall in love with.  I am to the point where I always start out with Free Divers in the trolling spread and almost always have at least one behind the boat.  I personally had a hand in picking out many of the colors. 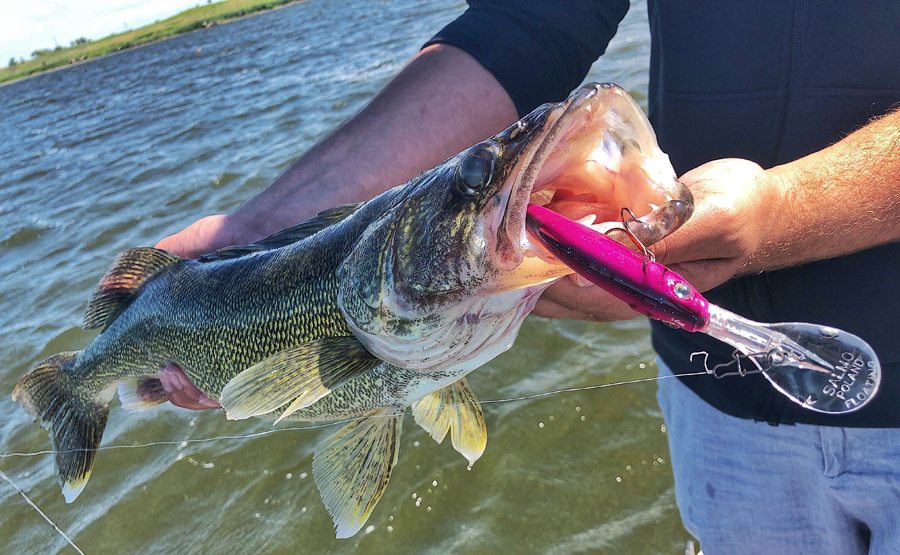 Deep diving lures that have a larger profile and move more water can be found by walleye in deep water. These big fish are often feeding on smelt, tulibee, ciscoe or some other type of pelagic baitfish.

Besides simply triggering big fish, the advantage of deep trolling is that you can move with the fish and simply cover water.  You can quickly eliminate the dead water.  Tuning in the key locations is the most important element of this type of fishing tactic.  Once you find the location and fish, you can fine tune running depth, lure and color along with speed.

One of the most important aspects of fine tuning the trolling spread besides how to follow the contour and when and where to start and stop your trolling pass is simply figuring out how high fish will move on a crank bait.  On tough days, you will have to put the lure right in front of the fish but there are also many days where it seems like you catch more fish by fishing five to ten feet above the fish and making the fish move up for the bait.  I like to run the lures high whenever possible as it gives me flexibility with crashing into the contour and also keeps lures out of snags and debris that can foul the action of the lure.  These types of locations typically have good water visibility so if you are in doubt, run the lures above the fish.

Keep your trolling system consistent by calibrating your line counter reels with the same exact ten pound braid so that everything is identical.  I like to keep my planer board rods high to keep the line from the rod tip to the board out of the water but angle my rod tips very low to the water on rods running behind the boat to keep my line counters more consistent with my planer board measurements.  If you run your rod tips high behind the boat, you will have a ten to twenty-foot discrepancy between the boards and the rods without boards.

Deep trolling crankbaits simply catches a lot of big fish come mid-summer and these patterns often last all the way into the fall.  Many tournaments have been won with these tactics and are a consistent way to find and catch big fish. 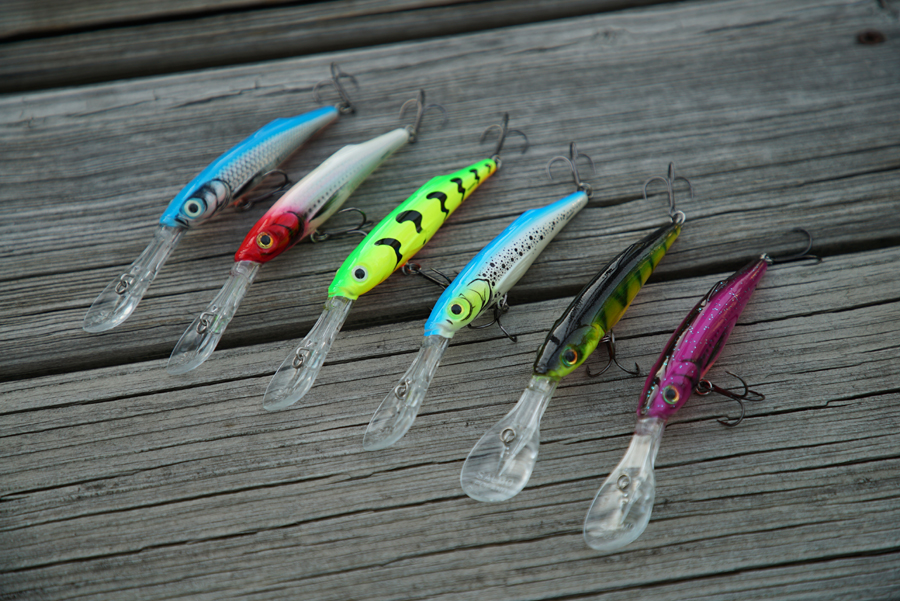 The new Salmo Free Diver has a deadly action and incredible dive curve for reaching extremely deep water. The best aspect of this lure is that the lure is hand tuned.