Some specific States and Provinces have open walleye seasons during the late ice period.  These fisheries offer tremendously fun ice fishing opportunities.  I love catching walleye any day of the year but what I love about late ice walleyes is the level of aggressiveness.  Patterns and locations can vary among fisheries but there are also some almost universal themes or tendencies that seem to pop up wherever walleye swim.

I get asked a couple of times a week if I keep a fishing journal.  I have never been a fan of journals because I can remember conditions and don’t believe that remembering a calendar date matters.  Does the lake ever open on the exact same day?  Does the first snow fall happen on the same day every year?  Do the surface temps hit fifty-five degrees on the same date every spring?  The answer is no.  Perhaps the biggest challenge of late ice walleye fishing is the range in which patterns can unfold.  The reason I bring up a journal that lines up on calendar dates is that the conditions can really range from year to year.  Don’t react to the calendar, react to conditions.

By far the biggest challenge to late ice walleye fishing is outliers to the norm.  We get some winters where the ice is gone or not safe by mid-March.  We have other winters where we are ice fishing well into April.  We see very different patterns on March 15th for example when we still have three feet or more of ice and a lot of snow cover with no warmup versus a March 15th when the ice is starting to deteriorate and the shorelines are starting to melt.  A long winter that pushes back every conceivable metric can really offer a wide variety of patterns that might even seem unusual if you are locked into the calendar.

No two winters are ever the same but what we often find during the late ice period where we have a prolonged or late winter are deeper patterns.  To be specific, deep rock locations often load up with fish during these conditions.  Examples include the reefs on Lake of the Woods and some of the hard-bottom points and sunken islands on Devils Lake.  Not sure if these rock locations serve as a staging area for fish to gather as they leave the basin locations of midwinter or if something in the food chain kicks in when the days get longer.  All I do know is that when walleyes aren’t on necessarily the classic late ice locations that are often near current or shallow water, look deep.  This big picture patterns also seems to shine if the pattern seems like there is no pattern which sometimes happens with prolonged winters. 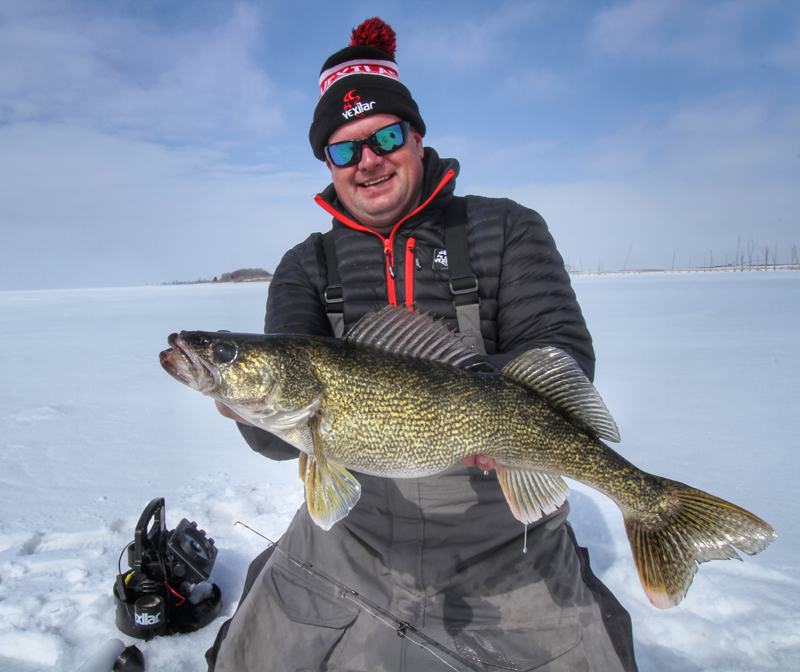 Don’t live and die by the calendar at late ice. Look at conditions. Prolonged winters can often create deeper patterns over rocks if the shorelines are not thawing out.

Ultimately, some of my most memorable late ice walleye patterns happen in shallow water less than ten feet.  The classic late ice scenario where the ice is deteriorating and run off is starting to seep in along the shorelines.  You know when you have really hit true late ice conditions when the shoreline ice starts to separate from the shore.  Often, the water will become more stained and have more color.  This thaw really drives these shallow patterns.  This is when we often find aggressive fish in shallow water.

The classic locations include shallow reefs or hard bottom flats that are connected to the shoreline.  Large flats that have rock, gravel or sometimes sand that have access to deep water are classic spots.  As the water becomes more stained, there are times when the traditional sunrise and sunset windows become less obvious.  When this happens, moon rise and moon set can often become important. 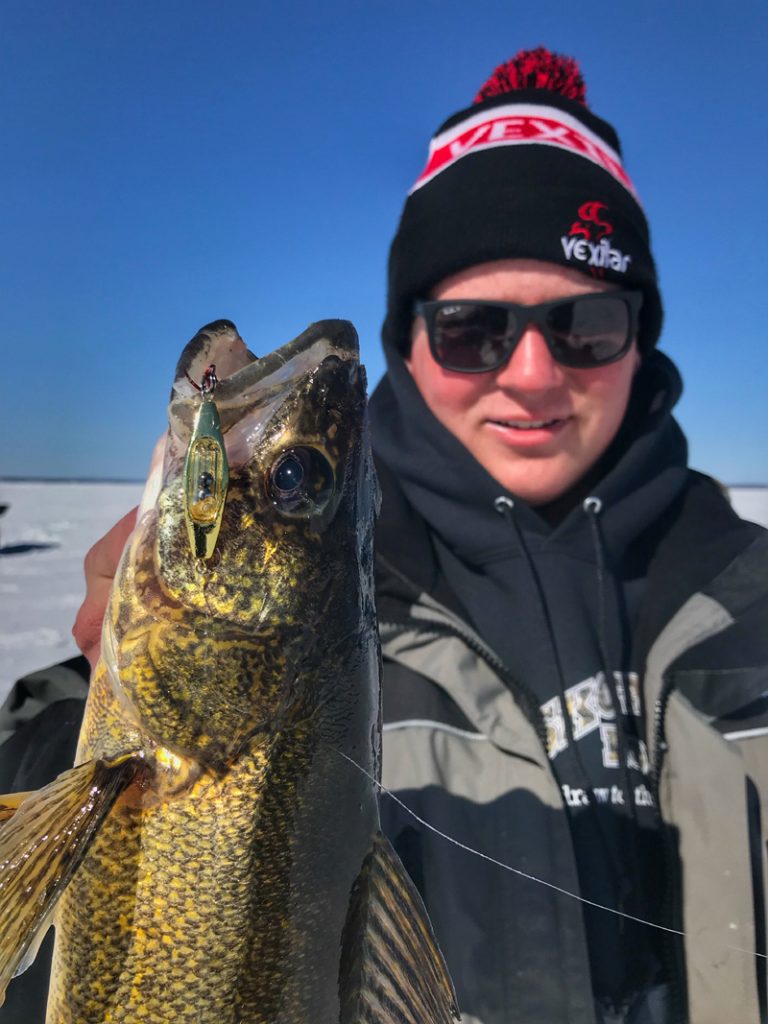 When the shorelines start to deteriorate and water starts to seep into the lake, the water will often become more stained. Use rattle baits like the Clam Pro Tackle Rattling Blade Spoon. Focus and watch moon rise and moon set as the water becomes stained.

On some bigger bodies of water with classic spring walleye movements into tributaries or rivers, simply connect the dots between traditional winter locations and the incoming water.  Could be a point or secondary point at the mouth of a traditional spawning bay on a reservoir.  Could be a sand flat out in front of the anticipated spawning location.  Fish often make massive moves on big water at late ice.  Really the pattern can be simply running traffic.  Setting up on a prominent location or piece of structure that fish pass by as the fish move from point A to point B.  When fish do start putting on a lot of miles, they will often become more washed out in color.  Pale fish tell you they are on the move.  This helps you figure out the strategy a little better.  The fish you are catching today won’t be around tomorrow but you will keep catching fish the next day if a new wave of fish pushes through.  This is overall the best strategy or situation I have found for catching big walleye at late ice.

Especially when we get towards the end of late ice, don’t be afraid to fish with aggressive presentations.  When fish will respond to aggressive presentations, you can simply move and encounter more fish because fish can find and see aggressive presentations from further away.  Big fan of horizontal swim lures like the classic Jigging Rap, Jigging Shad Rap and Salmo Chubby Darters.  Have absolutely fallen in love with the Salmo Rail Shad.  Blade baits like the classic Heddon Sonar can shine if there is current.  Spoons are always a staple.  In stained water, experiment with rattle spoons like the CPT Rattling Blade Spoon.  In water with good visibility, try flutter spoons like the CPT Leech Flutter Spoon.  Rattle Baits like Ripping Raps and Live Targets can also shine.  More important than the lure perhaps is the attitude.  Make the fish chase the lure and pound the lure and lift the lure high when fish aren’t around.  Pull fish in and make the fish react or chase the lure.

We can’t talk about all this great walleye fishing at late ice without also stressing safety.  The classic metrics no longer apply.  There are many charts that highlight how you can walk on three to four inches of good ice.  You can drive a vehicle on thirteen inches of good ice.  None of this applies at late ice.  When the ice begins to deteriorate and rot, the ice no longer has the same strength.  When ice begins to turn black or dark green and begins to crumble and come up in chunks when your drilling holes, the ice is bad.  Typically, the snow on top of the ice melts and you will see snow and water on top of the ice.  That usually means the ice is still good.  When all the snow melts and the water soaks into the ice, that is when your days are limited.  Water soaking into the ice deteriorates the ice quickly.  Be diligent on safety and simply stay off ice that is bad no matter how good the fishing is.  Be prepared by having a throw rope, ice picks and flotation.  Pulling yourself out of water when the ice is bad is much more difficult because you make such a smaller hole when you fall through and the ice often breaks when you try to climb out.  At late ice, I fear six inches of rotten ice.  Typically, you will see the ice break down in stages where there might be six inches of bad ice and then six inches of good ice below it, which you can tell when drilling a hole.  Pay attention not only the ice conditions but also the wind and forecast.  Always prioritize safety. 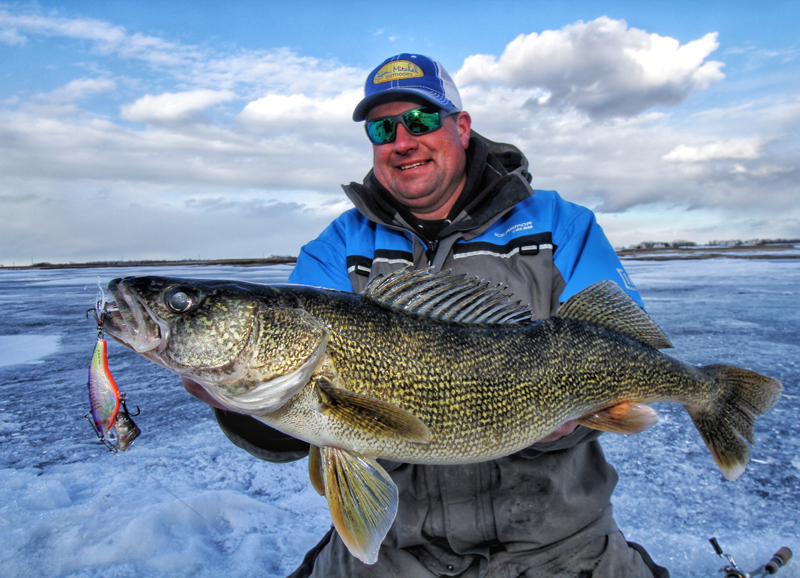 Late ice often means aggressive walleye. Don’t be afraid to look shallow and fish lures with an attitude. This late ice walleye caught by the author, hit a Salmo Rail Shad. Pound the lure hard and lift the lure to make the fish chase.