Lake trout are a fascinating fish to target through the ice and I would dare say the popularity of lake trout has grown immensely over the past decade.  When we first developed the Mackinaw series of ice rods in our Jason Mitchell Rod lineup back in 2005, there were very few rods on the market designed for lake trout fishing.  The niche was small at the time.  The rods being marketed as predator or lake trout rods at the time had too short of handles and the actions weren’t heavy enough.  The options were either pool cue stiff fiberglass rods that featured three guides or getting a rod built in a custom rod shop.  I remember Berkley making a predator rod in the Dave Genz Lightning Rod lineup that was a great rod at the time but the rod was discontinued after a few years.  Once that rod was discontinued, the only good option was Thorne Brothers.

When we developed the Mackinaw Baitcasting Rod, we incorporated a spiral or Robinson wrap where the guides started on top of the blank near the real seat and rotated around the bottom of the rod blank.  The idea for that design came from the late Ed “Backwater Eddy” Carlson.  I can still remember showing the rod design to bait and tackle shops with puzzled looks.  I will never forget one occasion where I showed the rod to a tackle shop owner in northern Minnesota.

“You have some serious issues with quality control,” explained the shop owner.  His face was wrinkled as he ran his fingers down the rotated guide train.

I explained the purpose of the rotated guide train and his expression changed. The grimace turned to a smile and he told me, “I’ll take twenty of them!”  The spiral guide wrap became popular as many ice anglers switched over to braided line when fishing for lake trout over deep water.  The spiral wrap allowed a smoother line route to the baitcasting reel when the rod was loaded up and the guides collected a lot of the ice at the rod tip.  Line wasn’t as apt to wrap around a guide.  In our quest to build the ultimate lake trout rod, we took a few risks.

The challenge back than was simply numbers, at least stateside.  One of the biggest markets for our very first Mackinaw rod at that time was the Lake Superior fishery.  We also had some pockets of lake trout anglers in northern Minnesota and upstate New York.  We were selling ice rods to small bait and tackle shops but sales for that rod action blew up when anglers in Canada discovered the rod.  We soon began selling the Mackinaw Series in many of the big box retail stores and other rod companies sat up and took notice.  Several other rod companies began selling a more seriously designed predator rod and the competition was ultimately good for the consumer.  Since that beginning, lake trout have become a much more sought-after fish, at least for anglers in the Midwest. 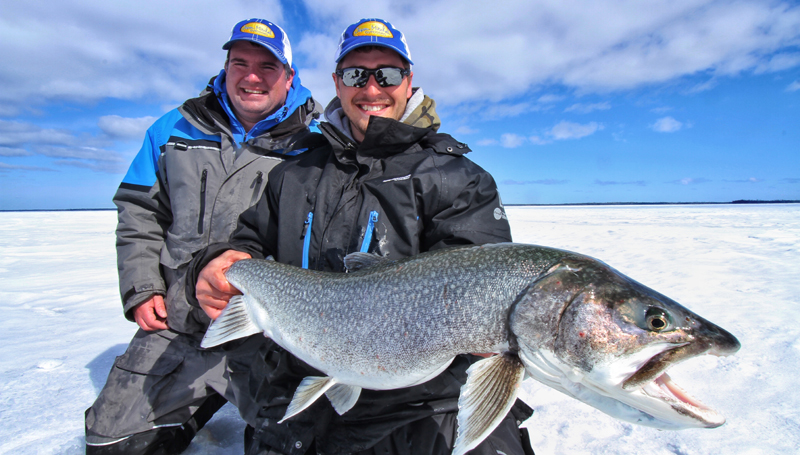 Lake trout popularity continues to grow each winter. Better information combined with better equipment is making many destination fisheries much less intimidating. Pictured is Chandler Jacob of Minot, North Dakota with a massive Clearwater Lake, Manitoba lake trout caught while filming an episode of Jason Mitchell Outdoors this past winter.

What has really drove the increased popularity of lake trout in my opinion is that more anglers are willing to travel today.  Once you get bit by the lake trout bug, you find yourself driving to reach them every winter.  Today’s world is just so much smaller than even twenty years ago.  There is more information available.  There is better and more reliable equipment.  Anglers aren’t as intimidated to venture to remote areas.  There are more guides specializing in lake trout ice fishing today.  When we first developed the Mackinaw Series back in the day, we worked extensively with the late Jim Hudson on Lake Superior.  At that period, there were very few guides who specialized or spent any significant time targeting lake trout through the ice in the United States.  There was so much less information available and the learning curve was much longer and steeper.  Lake trout had a mystique and we were ecstatic if we caught a single lake trout in a day of fishing.

Enter a vast exchange in information courtesy of the age of internet that includes so much technical advice.  Enter better mapping and understanding of deep structure.  Enter better equipment with more anglers using that equipment.  There was a time when a simple auger rack on a snowmobile was a new novelty.  There was a time not that long ago when having tracks on an ATV was unheard of.  In some regions, there weren’t even any overnight lodging options available.  Lake trout fishing can still be difficult, can still be remote and as we often joke, “the highs are high and the lows are low” but there is no doubt… these destination adventure trips are much easier to do today and more anglers are discovering this incredible fishing opportunity. 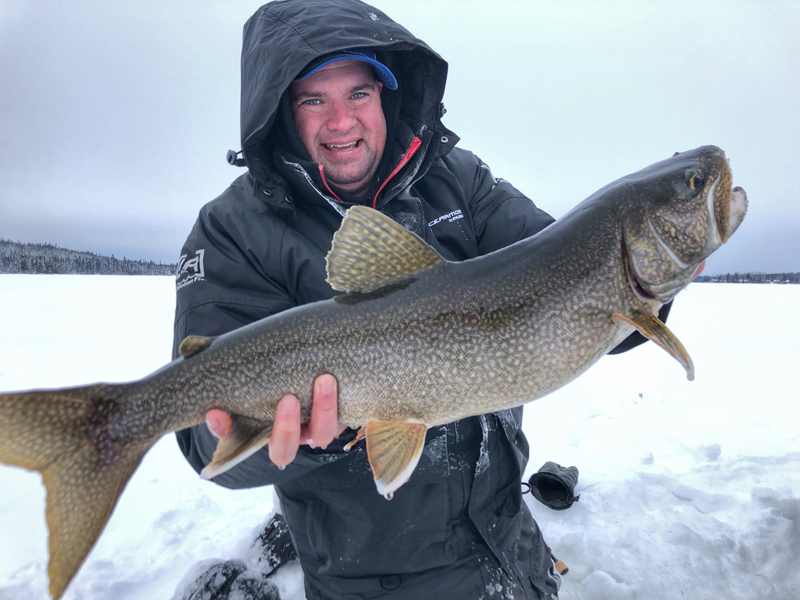 Many opportunities exist today for big lake trout that weren’t realistic a few decades ago. Pictured is the author, Jason Mitchell with a big lake trout from Kississing Lake in northern Manitoba. Better winter roads and overnight lodging options have blown this area up for adventurous ice anglers who reside outside the area.

There are many premier lake trout fishing opportunities and some of these opportunities like Lake Simcoe and Geneva Lake are relatively close to a lot of people.  Some fisheries like Pactola Reservoir in South Dakota are the result of creating a new fishery through stocking efforts.  Perhaps the original lake trout destination for many Midwest and particularly Minnesota based anglers is northwest Ontario.  More specifically, Lake of the Woods but there is some tremendous drive to destinations just north of the border near communities like Kenora and Nestor Falls.  Manitoba has become much more accessible over the past twenty years with more lodging options available through the winter.  Manitoba fisheries like Clearwater Lake, Kississing Lake, Cranberry Portage, Bakers Narrows and Reed Lake all offer some of the very best drive to lake trout water particularly for the coveted fish over the thirty-five-inch mark.  What I love about Manitoba lake trout destinations is that you feel like you are traveling back in time.  There is very little pressure and not many tracks.  Some of these destinations were almost inaccessible to anglers outside the area not that terribly long ago but better roads and winter lodging options have blown this remote region up.  When we look to the west, For Peck Reservoir in eastern Montana is perhaps one of the best fisheries in the lower 48 for numbers of quality fish.

For catching sick numbers of nice lake trout at least stateside, Fort Peck would be tough to beat.  For the very biggest trout in the lower 48, the Apostle Islands of Lake Superior is tops when the ice conditions are safe.  For adventure and unbelievable unpressured lake trout options for both numbers and size, northern Manitoba is at the very top of any list.  For ease to reach for many Midwest based anglers with consistent ice and fishing, northwest Ontario is still a viable option.  All these destinations are worth the travel to reach. 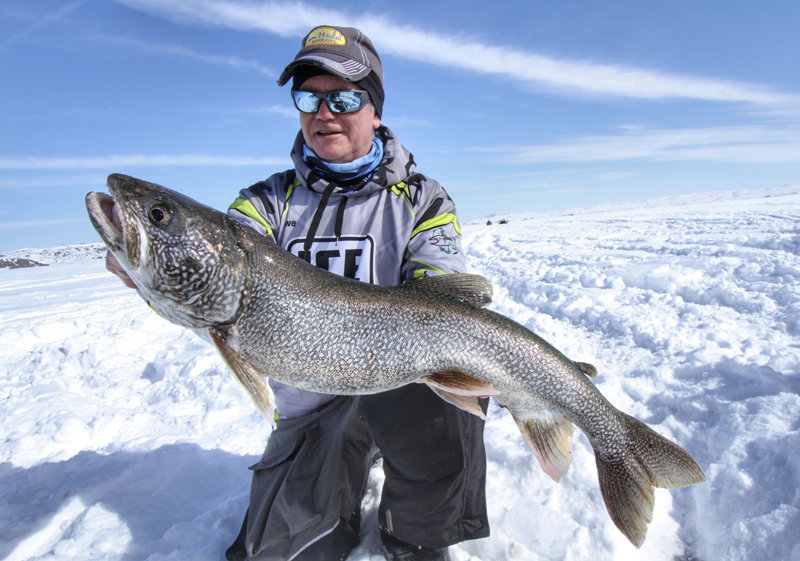 Fort Peck Reservoir in eastern Montana is a trek for many ice anglers to reach but this remote fishery remains a top tier destination for anglers looking for numbers of quality lake trout in the lower 48.

No doubt that the lake trout fraternity is growing each winter and more anglers are falling in love with these powerful predators.  A fish that can live for several decades on some fisheries.  A fish that can push your equipment to the max.  A fish that can burn drag for a hundred feet before turning.  A fish that can grow to awe inspiring size.  Lake trout are king wherever they swim and you will feel like a king when you catch one of these amazing fish.