Jerk baits can roll with a lot of different names and monikers.  Twitch baits, minnow baits…. Basically any slender profile, shallow running, minnow shaped hard bait.  The actions and characteristics can vary dramatically amongst different companies and lures.  The classic lure that started this entire lure category is the original Floating Rapala which has a subdued action and very subtle roll and shimmy.  Over time, other lures came on the scene like the Smithwick Rogue and Rattling Rogue, the Rapala Husky Jerk and X rap, Lucky Craft Pointer Minnow, Mega Bass Vision and the Salmo Rattlin’ Sting.

This entire lure category can be fished to extremes.  From slow steady retrieves where the lure has a tiny subtle footprint to a steady retrieve interrupted by pauses and stalls with suspending lures.  Going the other extreme, some of these lures handle slashing speeds and can be snapped forward to get the lure to erratically slash or slide off one direction only to slide off to the opposite direction on the next rip.  Lures that were designed for these sharp snaps have a much more aggressive action where anglers often snap the lure forward with a much faster retrieve that might include three rapid snaps during a reel revolution that causes the lure to snap and slash forward rapidly and stopping or hanging momentarily between snaps and then stalling momentarily longer as you bring your rod back towards the lure.  The very best lures ride very horizontally on the stall and many of the most recent lure designs feature long cast sliding weight transfers that aid in longer casts.  The new Salmo Rattlin’ Sting has been called an absolute jerk bait masterpiece by many astute walleye and bass anglers just because this particular lure does so many things so well.

Now walleye anglers have casted these same lures for years particularly while wader fishing in the spring and fall around rip rap, current bottlenecks and gravel but more walleye anglers are taking plays from the bass fishing handbook by casting these lures.  Both casting and trolling jerk baits have advantages and disadvantages for working these lures to catch walleyes.

Trolling is a broad brush where casting is precise.  With the advancements in spot locking features on trolling motors and anchoring devices like Talons and Power Poles, precise fishing is easier than ever.

Early in the season before the water temperatures hit sixty degrees, I find that I catch more fish trolling jerk baits by pulling the boat with the bow mount trolling motor.  By trolling with an electric trolling motor, I can creep along at slower speeds that might range from one mile to a mile and a half an hour.  In extremely clear water, I often use planer boards, monofilament line and do a lot of S curves with the boat.  So often early in the year, fish seem much spookier but as the water temps rise, I can get away with a lot more.  As the summer progresses, I find that I can pick up my speed to well over two miles per hour.  Regardless of time of  year, there are many days where I catch more fish with the rod I am holding by pumping and stopping the lure.  Many hits will come on the turn or stop after a snap or pump forward. 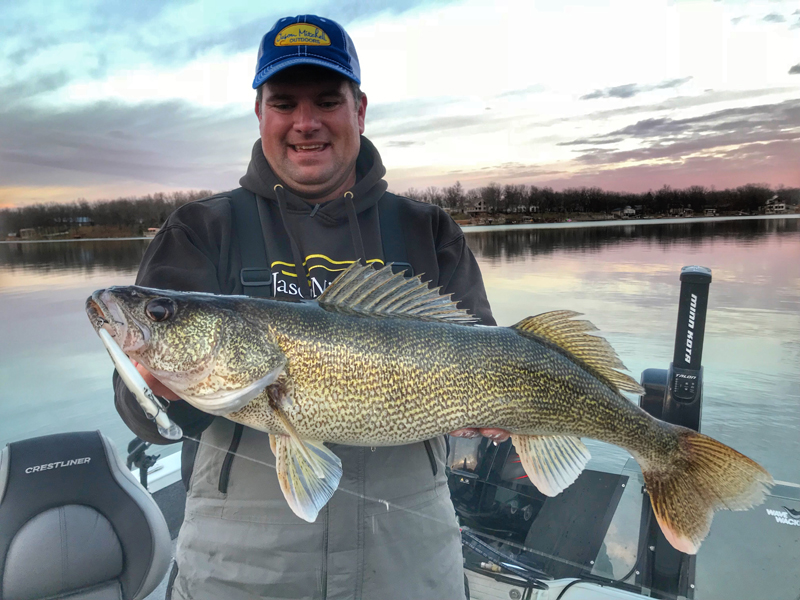 Wind or weeds combined with really shallow fish often call for casting these baits.  Again, early in the season, we often catch more fish with mono and often prefer a spinning reel as the slower gear ratios make it easier to crawl these lures forward.  A few additional tips for casting… change up your retrieve speed and cadence where you methodically fish every cast a little different to find that groove that the fish respond to.  As a general rule of thumb early in the year, it is really easy to fish these lures too fast.  I have to keep reminding myself to slow down.  What also happens almost subconsciously is that we tend to fish faster when we are excited.  I find that I often have a tendency to fish faster after catching a fish for example and have to tell myself to slow back down.  Finding that zone each day is paramount, and I even go so far as make every angler in the boat use the exact same rod and reel so that if somebody starts hooking up, we can match the retrieve speed by watching each other.

When fish are a little off, long casts often catch more fish because walleyes are notorious for following and pecking at the back of the lure for a considerable distance and fish will often follow the lure out over deeper water.  When the fish are aggressive, short casts will allow you to make more casts right in the zone.  When fishing over emerging weeds like cabbage or pencil reeds, fish high and make the fish come up for the lure as you won’t catch anything if the lure is fouled up.

As the weeds keep growing higher, we often find ourselves using shallower lures as the season progresses to stay above the weeds.  Strong wind and waves can also turn on a jerk bait bite.  As a rule of thumb, the sweet spot for running depth is double the height of the wave.  In other words, in three-foot swells, try to run about six feet but big fish in particular have no problem riding the turbulence right below the surface.  Strong wind over rock or a hard bottom is typically an opportunistic  pattern where casting or trolling jerk baits shine.

A few additional notes to consider.  As the water temps heat up over sixty-five degrees and fish start responding to more aggressive cadences and faster speeds, braided line with a fluorocarbon leader can give the lure a much more pronounced action and is sometimes necessary for snapping off weed stalks.

Jerk baits in some capacity have been in tackle boxes for decades but are becoming more popular with mainstream walleye anglers.  New lure designs have evolved that trigger fish regardless of attitude and time of year.  Whenever fish are shallow, jerk baits are capable of finding fish much more quickly than many traditional soft bait and live bait presentations.

The author, Jason Mitchell earned a renowned reputation as a fishing guide on North Dakota’s Devils Lake and hosts the outdoor television program Jason Mitchell Outdoors which airs on Fox Sports North and Fox Sports Midwest.  More information can be found at www.jasonmitchelloutdoors.com.