Weed walleye patterns are solid on so many fisheries.  In fact, I would dare argue that there are not many natural lakes where there are not a large population of walleyes that are using weeds.  Some of the most consistent summer patterns for walleye take place around weeds yet many walleye anglers avoid the weeds.  Walleye anglers have been programmed for decades to look for structure and more specifically, hard bottom locations like rocks or gravel.  These classic structure locations hold fish but also attract a lot of attention.

There is one universal weed location that just seems to attract and hold walleye.  Sand flats that drop off into deep water typically have that magic combination of depth and the right weed varieties to hold walleye well into the summer.  The sweet spots can vary from lake to lake and vary on water clarity but good stands of cabbage just hold a lot of walleye.  There are two basic location types that seem to shine for holding fish.  The classic shallow sand shelf that drops into deep water often has a deep lip or step on the break where lush stands of weeds grow right next to the abyss of deep water.  This edge is a high percentage location.  Another great location is any kind of mid-depth trough or bowl that is in an expansive shallow sand flat.  Imagine a large flat that is five to ten feet of water that is typically covered in weeds.  If you can find any kind of dip in the depth that is just deep enough where the weeds change or create an opening, this bowl or trough in this weedy flat will often fill up with walleye.

Many anglers avoid fishing the weeds or get frustrated but fishing weeds can be surprisingly easy.  We recently filmed an episode in the Detroit Lakes Region of western Minnesota using slip bobbers and leeches over emerging cabbage.  Cabbage or broadleaf pondweed varieties typically not just hold walleye but panfish and musky.  Most fish simply love this type of weed.  With weed walleyes, remember that you don’t have to necessarily punch into the weeds to catch fish, you just have to fish next to the weeds or above the weeds.  Below is a list of top presentations we have found for weed walleye along with a few scenarios where each presentation shines. 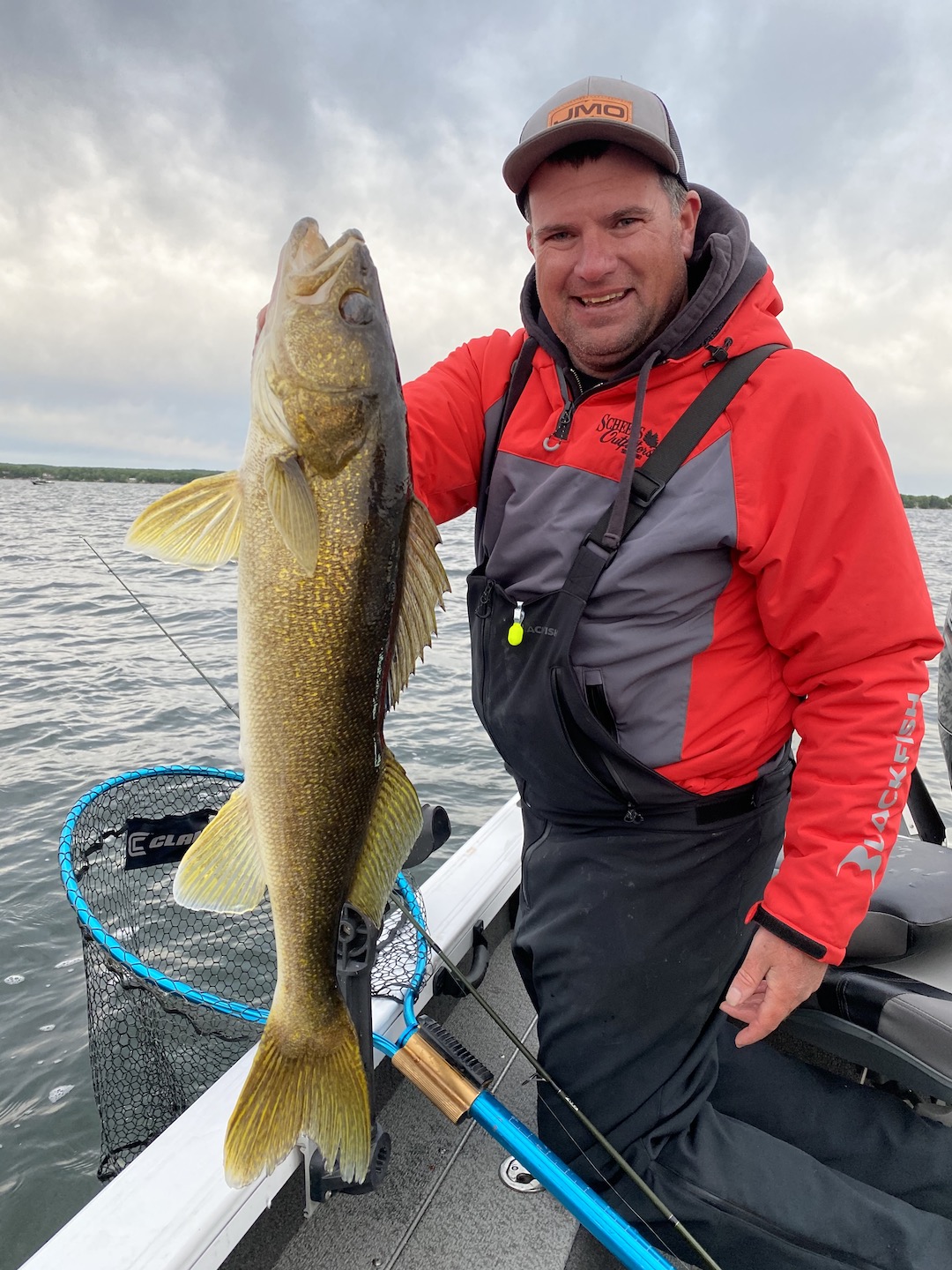 Weed walleye patterns are often overlooked but extremely productive. Match the right presentation to the location so you can fish more efficiently and clean. Pictured is Jason Mitchell with a great Minnesota weed walleye.

If there is a blanket of low weeds on the bottom or defined open lanes in the weeds, simply set a slip bobber so that the leech hangs above the weeds.  Slip bobbers shine whenever cold fronts have the fish off or when fish are positioned low in the weeds. Slip bobbers are deadly effective when you know where fish are and want to keep bait in an exact location.  Because of the preciseness of slip bobbers, the strategy is to often sit on a key location and let fish move through the location.  You can also fish slip bobbers more aggressively particularly in open weed pockets.  Later in the summer when weeds start to reach the surface, you can often work open pockets or open lanes in the weeds that you can physically see with a slip bobber. 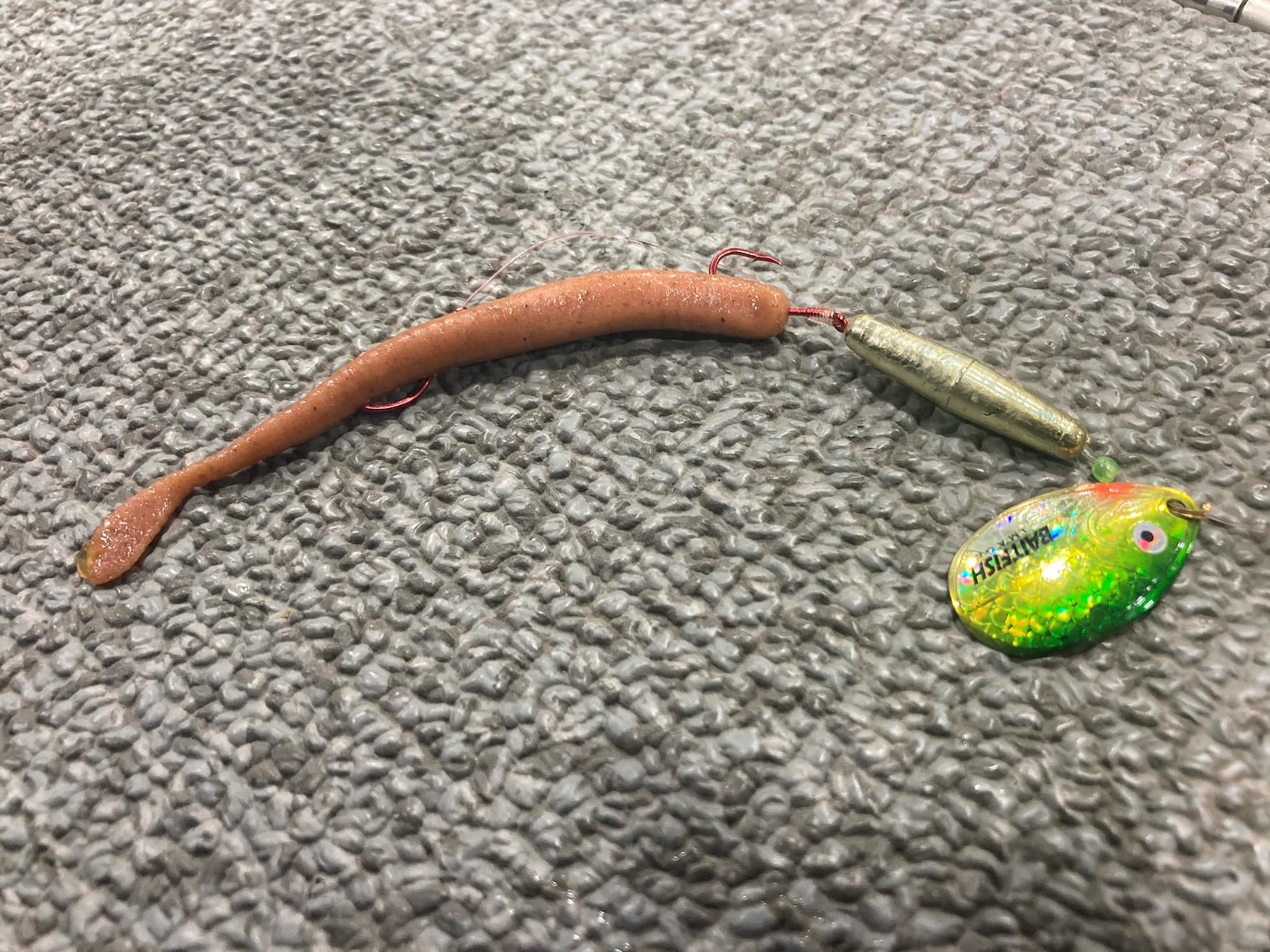 Spinners ran in conjunction with bullet weights or split shot are great for skimming over the tops of sporadic weed growth.  For probing defined outside weed edges, use a spinner on a short snell behind a bottom bouncer.  Pictured is a Northland Fishing Tackle Rainbow Spinner Harness tipped with a Gulp! Crawler.

We often find walleyes scattered along big contours or along the edges of large flats where there is sporadic weed growth.  When these weeds are random and don’t reach the surface, long lining a spinner harness behind the boat with just a split shot or small bullet weight can be deadly for skimming the harness over the tops of weeds.  This presentation takes a little experimentation and touch in that you must find that magic speed and amount of weight to skim the weeds without snagging.  A variation of this approach can also include running spinner harnesses on planer boards to the sides of the boat particularly when there is just a few feet of water between the weeds and the surface of the water where we often skim harnesses just a few feet down behind the board over the tops of the weeds.  What is interesting with this approach is that we typically fish higher in the water column as summer progresses and the weeds grow higher into the water column.

On some fisheries, particularly the dish bowl prairie lakes of the Dakotas, the water is stained and the weeds can offer a distinct weed edge in as shallow as six or seven feet of water.  There is often a sharp edge where weeds quit growing and this defined edge is perfect for running a bottom bouncer and spinner.  When running these outside edges, shorten up your snell.  Bottom bouncers can shine whenever there is a prominent outside weed edge that features a definite transition.  Keep the snells short (three feet) and don’t be afraid to run floats on the harnesses to keep them off the bottom.

A long shank jig and soft plastic paddle tail or swim bait is extremely versatile around weeds.  You can probe openings and edges; you can swim the plastic over the tops of emerging weeds.  The single hook can be snapped through weeds and typically catch fewer weeds than the treble hooks of a crank bait.  For simply breaking down water and finding fish, not to mention triggering aggressive fish… few things are more efficient in the weeds than a paddle tail soft plastic.  Don’t be afraid to use some of the longer profiles, especially come mid-summer.  We often use shad/ paddle tail profiles that range between four to five inches.  Love the Salmo Walleye Shads as the longer bodies are just stiff enough to put off a lot of vibration and thump which seems important for pulling aggressive walleye out of weeds.  For casting into water that is less then fourteen feet, we often use a ¼ ounce or 3/8th ounce Northland Slurp Jig Head with a long shank.  Ten-pound braid like Fireline is important for being able to snap the jig through weeds.  Pair up the braid with a two-to-three-foot fluorocarbon leader that is twelve-to-fourteen-pound test.

Early summer sees a major push of shiners into pencil reeds and when weeds are still low or just emerging, there are some very consistent weed walleye patterns that revolve around the shiner spawn.  Pitching jigs and minnows is a solid program that happens on so many well-known Minnesota walleye fisheries but the program with a jig and shiner can be much different than a jig and soft plastic.  There are times particularly during the middle of the day with no or little wind when live bait will simply outperform a jig and plastic… especially in really clear water.  The jig and shiner bite is a classic Minnesota walleye staple for producing fish.  Above, we stated the importance of using braided line when using soft plastics in weeds.  With jigs and minnows, we often use a six or eight-pound monofilament line so the jig hangs and glides in the water.  This is a solid presentation early in the summer just as the weeds start to emerge.  Snap and glid or swim jigs tipped with minnows.

Not for the Faint of Heart

Never forget a comment AL Lindner made about weed walleyes on a JMO Podcast a while back.  He stated that weed walleyes are, “not for the faint of heart.”  That made all of us laugh.  You have to put in some time to figure out the right program for weed walleyes and as the weeds grow and change, that can change your program.  Weed walleye patterns are productive and only with the right presentation and mindset.  Once you figure out the program, weeds can be simple to fish but you have to do some homework.  Match up the right presentation so that you can fish efficiently and clean.  You will have to spend a little bit of time learning the location and you must get some intimacy with the spot so you can fish it effectively.  Because weed locations do take a little while to figure out and learn, this factors into the effectiveness of weed locations.  Most anglers don’t want to put in the work but in today’s world where there are fewer secrets and more people fishing, weed walleyes are some of the most consistent and productive programs on many lakes across the Midwest.