Early season walleye patterns on many of northern Minnesota’s most renown walleye fisheries often occur in less than twelve feet of water. While classic deep structure patterns will quickly emerge as the summer progresses, many anglers miss opportunities by looking too deep during early summer.

Crestliner Boats Pro and guide Scott Seibert has spent a lot of time on these fisheries, particularly Lake Winnibigoshish and Leech Lake. These destination fisheries hold tremendous walleye populations and attract legions of anglers from across the Midwest each season. Besides sharing a common popularity, what these fisheries also have in common are shallow weed line bites that often occur in less than ten feet of water.

The shiner spawn is a major trigger that creates shallow walleye bites on many natural lakes in northern Minnesota. Compared to many other fish species, shiners spawn well into the season and the shiner spawn often coincides with blooming lilacs. Shallow sand or fine gravel is often preferred but where there is sand on many natural lakes, there is also weed growth. On some bodies of water, pencil reeds, cabbage or some other weed can be found in close proximity to where shiners spawn. When shiners move in to spawn, the walleyes are right behind. Besides shiners, small yellow perch are also common and available in these shallow locations that have some weed growth.

Many of these fisheries offer extremely good water visibility. This relatively clear water can create challenges for anglers. Wind can trigger aggressive fish to move up into shallow water and feed aggressively where a lack of wind can shut down some of these shallow bites. “Fishing the wind is crucial on most of these northern Minnesota Lakes like Winnie and Leech,” explains Seibert. “Be flexible and follow the wind. If the wind lays down, be prepared to slide out over the next break. Typically, when fish slide out past twelve feet, you will be able to pick them up on your electronics. Besides slick flat conditions, cold fronts and major weather systems can also push fish slightly deeper, but as a rule of thumb, you can expect some very aggressive fish up in less than ten feet of water during stable weather when there is wind.” 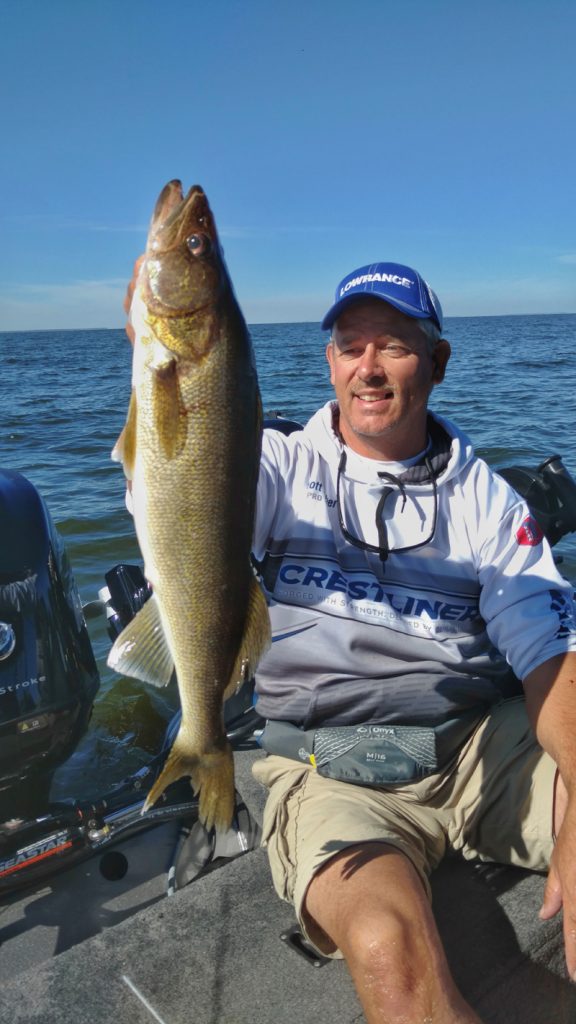 When the wind blows and the stars align for aggressive and shallow activity, one of Seibert’s favorite tactics is to long line a jig and red tail chub behind the boat. “Many anglers try to fish right below the boat with jigs but what I find in less than twelve feet of water is that even though there is wind, the fish are still often spooking from the boat,” explains Seibert. Cast the jig thirty to forty yards behind the boat and simple drag the jig like you would a live bait rig. The jig and chub can simply drag and swim behind the boat. If you make weed contact, snap the jig forward to clean off the jig.”

This long line jig approach is deadly for covering water and breaking down shallow wind-blown flats that often hold walleye. This run and gun method allows Seibert to contact roaming pods of fish that are typically on the move. “When the wind blows and these fish move up to eat, they are typically roaming so you have to roam as well to stay on fish. Add to the fact that wind changes in direction and velocity each day, you often must fish through locations each day until you find the right group of fish, stresses Seibert.

Early last summer, we filmed an episode for Jason Mitchell Outdoors Television on Lake Winnibigoshish with guide Charlie Worrath (Minnesota Fishing Pros) out of High Banks Resort. Worrath often relies on a spinner harness for quickly covering weed edges. For depths that range between eight and twelve feet of water, use a small 1/8th ounce bullet sinker ahead of the swivel that is attached to a six-foot spinner harness. Rig the spinner harness with a single number four long shank Aberdeen hook and double hook a three-inch shiner. Come down through the mouth and then rehook the minnow through the hide so that the minnow hangs straight on the hook. This rig is fished a good cast behind the boat at 1.2 to 1.6 miles per hour. Gold and perch pattern blades work well on both Winnie and Leech Lake. When you need to slide out deeper, simply crimp a split shot behind the bullet weight to add more weight. This bullet sinker/ spinner rig fishes well through weeds and low lying Chara. Again because of the clear water, these rigs work well because they are out behind the boat.

Because of the water visibility, clear monofilament shines for these long lining jig and spinner presentations. Eight-pound mono on a spinning rod like the Jason Mitchell Elite Series 6’6” Medium Light Fast Action is perfect for the spinner application. For the long line jig dragging presentation, use the Jason Mitchell Elite Series 6’6” Medium Fast Action. For a dependable spinning reel… look at Quantum’s Throttle Th20 as a moderately priced reel that performs solidly for walleye fishing applications.

Flat conditions can make fishing much more difficult in these locations and anglers are often forced to slide out over the first major break by mid-day. Sharp breaks adjacent to shallow flats and weed lines will often concentrate fish. When fish do slide out into twelve to twenty feet of water along sharp break lines, use your electronics to look for fish and anticipate shadows by where the angle of the sun is. Sharp break lines that cast deep dark shadows will often hold fish when the wind lays down and the sun gets higher.

Because of the wind driven nature of these northern Minnesota fisheries, anglers must be flexible. Anticipate the fact that you are probably going to have to look for and find fish in different locations each day as weather changes and wind directions switch. By being opportunistic and capitalizing on these shallow water weed bites with these long lining techniques that get your presentation away from the boat, you can consistently catch more walleye this season on these popular fisheries.