Early ice is a prime window for targeting walleye.  Classic early ice locations typically repeat the prominent fall locations.  As a rule of thumb, good fishing in the fall often means good fishing at first ice.  Tough fishing in the fall can often translate to tough fishing at first ice.  Finding and catching walleyes right away in the ice season is often simply targeting locations where we put the fish to bed last in the boat.  Fall fishing intel is some of the best intel for trying to find first ice walleye.  Of course, there are perennial hot spots that for some reason or another just fish well right away.  Mille Lacs comes to mind along with Upper Red Lake. 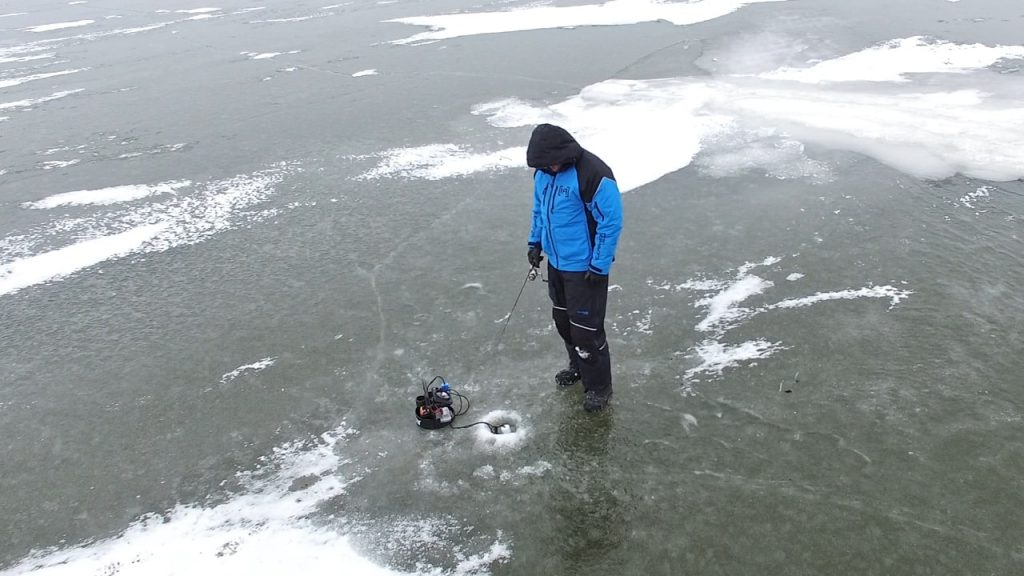 As a rule of thumb, most prominent destination fisheries fish well at early ice and perhaps the single biggest reason is simply the rest these fish have had.  There hasn’t been a boat or auger above these fish sometimes for a month.  Generally, some of the first anglers that land on some of these fish experience good fishing and the fishing generally goes downhill or gets tougher as people show up.  By the time the ice can support a full-size pickup, these early ice bites are often history.  Early ice walleye fishing is often all about first come first serve but do so with safety in mind.  Here are a few tips that really seem to be prominent in our travels each winter.  Pretty universal stuff that has produced walleye on several different fisheries across the Midwest. 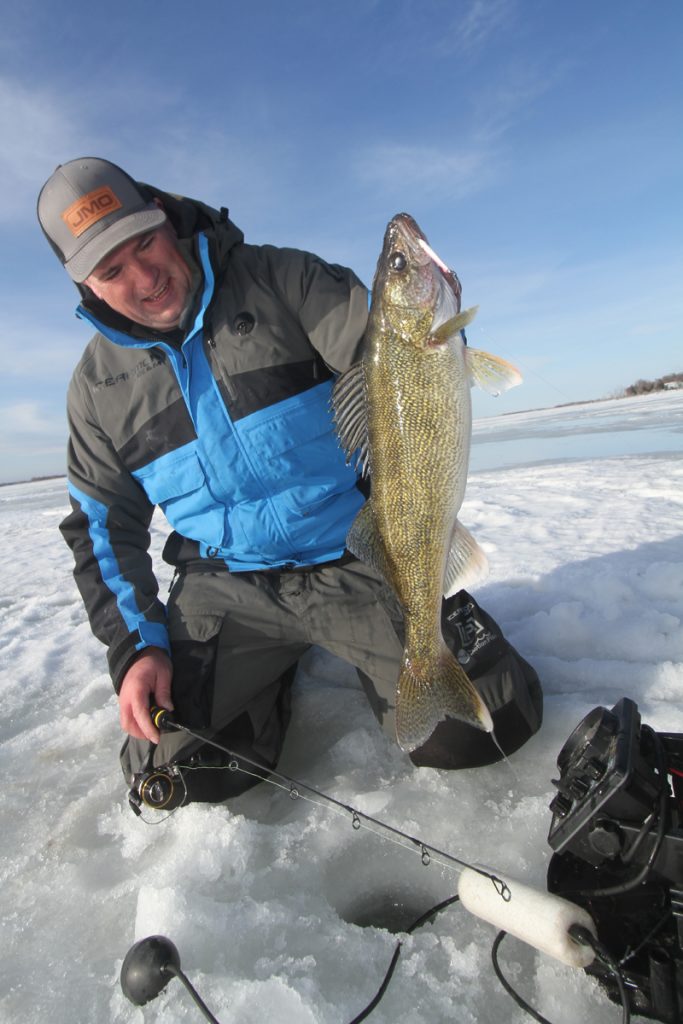 Thin ice and thin water often means spooky walleye. Drill your holes ahead of time and let the spot settle down. The first angles on a location often do the best and the bite typically falls off as a crowd gathers.

Shallow Shoreline Structure seems to produce walleye on most fisheries at early ice.  Probably a little bit out of necessity as the structure that is close to shore is some of the very earliest locations we can reach by either foot or with an ATV.  Large prominent pieces of structure however that are connected to the shoreline often load up with walleye at early ice.  My favorite locations are shallow reef complexes that are connected to the shoreline.  Shallow might be five feet or fifteen feet depending on the water.  Good bottom might be sand, gravel or rock but these types of spots just seem to produce walleye at early ice on many different fisheries.  Shoreline points and flats that have a decent access to deeper water can all be good.  If given the choice, I personally like to target the larger spots if I can get there first.  These types of spots often fire up at sunrise, sunset or after dark and are done by the time a crowd gathers.

Aggressive lures and cadences trigger fresh fish.  Much has been said about reaction baits or call baits that are used to trigger aggressive strikes and bring fish in from a distance.  More so than the exact individual lure is that attitude.  You can fish a ¼ ounce lead head jig aggressively and trigger fish.  Early ice walleye can often be extremely aggressive and respond well to aggressive presentations.  Use this to your advantage, not just for triggering fish but also breaking down water and eliminating dead areas.  If you are fishing through fresh ice, be confident that if there are any fish around, some will meet you halfway and find you.  More so than any time of year except for late ice, you can eliminate water so quickly.  Loud rattles like the CPT Rattling Blade Spoon are deadly for ringing the bell.  High action glide baits like the CPT Tikka Mino or vibration baits like the Salmo Rail Shad are all deadly for finding and triggering aggressive walleye.

The noise factor can be a big factor at early ice.  Noise can kill a bite at any time of year but the severity of noise seems heightened at early ice when you are dealing with a lot less ice on what is often shallow water.  We have seen many situations where walking with ice cleats spooked fish away.  There have also been times when dragging a Fish Trap or sled on the ice shut down the spot.  Obviously, you must make some noise to set up on a spot but be conscience of noise and try to keep noise to a minimum.  If you can, drill a lot of holes where you plan on fishing a good hour or so before the anticipated prime time.  Get set up off the structure with your ATV and gear and walk in with your auger.  Walk softly and try not to drag or drop anything on the ice.  Use a head lamp and be careful with bright light when fishing after dark.  When fishing through locations where there is thin ice that is clear enough to see through, slow down and let the spot settle down as you fish.  Spooking fish that are bumping off your presence often need five to twenty minutes to come back so it can be easy at times to miss fish by moving too aggressively in thin water on top of thin ice.

Remote lines like tip ups can play a huge role on shallow walleye at early ice.  Doesn’t have to necessarily be a tip up but tip ups are just so deadly as a remote set line.  When fish are spooking and not letting you get over the top of them, tip ups can save the night.  Situations where we have seen this become prominent are fisheries with less than eight inches of clear ice over crystal clear water.  If you can see through the ice and see bottom in eight feet of water as you are walking out on early ice, set out as many tip ups as you legally can.  We have seen times when the tip ups became such a factor in this type of situation where we ended up setting out every tip up we legally could and literally sat on shore twiddling our thumbs waiting for a flag to pop up.  Larger creek chubs and sucker minnows are ideal especially after dark or when targeting big fish.  Don’t be afraid to get up higher than halfway in the water column in shallow water after dark. 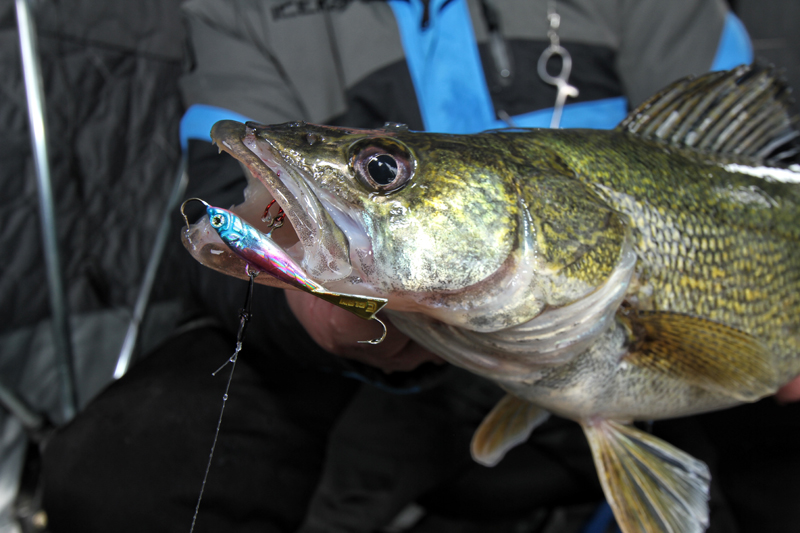 Early ice walleye can often be extremely aggressive. Break down locations with aggressive lures worked on hard pounding cadences to bring fish under you. The Clam Pro Tackle Tikka Mino is a deadly glide bait that has a zinc fin that causes the lure to slide out further on the upstroke.

Wind is often cliché with walleye fishing during the open water season but really strong winds right at freeze up can really disrupt some fisheries at first ice.  Forty mile per hour winds right at freeze up can have a major effect particularly on small, shallow dish bowl type lakes but we have even seen this wind effect on much larger fisheries like Lake of the Woods.  There are a couple of indicators of this phenomenon.  Jagged broken up ice that is stacked up and extremely dirty and turbid water.  When you can’t see the bottom of the ice when fishing on four or six inches of ice, you are going to have really tough fishing and the best bet is to simply pick a different lake.  Forty mile per hour winds can churn up a lake at any time of year but normally that stirred up sediment clears up in a handful of days.  When the water gets colder and denser however, that sediment hangs in the water much longer and can take several weeks to clear up.  Obviously, these lakes will fish better as winter progresses and the water clears up.

The early ice period produces great walleye fishing but fishing early ice can be much different than other times of the year.  Fish can be extremely aggressive but easily spooked.  Reports will often be limited so fall fishing memories are often the best starting point.  Prioritize ice safety and always have floatation, rope and an ice bar or ice chisel for checking the ice thickness as you walk.  While many of the classic walleye bites happen at sunset or shortly after dark, get out plenty early so you can drill your holes and let the commotion settle down.  No doubt there are few things as rewarding as landing the first big walleye of the winter through four inches of clear ice where you can actually see the fish fighting through the ice several feet to the side of you.  Landing big walleye through a hole in less than six inches of ice is tricky because the fish don’t turn and can sure back up easier.  Reach your hand below the ice and pin them to the bottom of the ice.