Crappie inhabit so many different environments and ecosystems.  What has always made ice fishing so much fun for me is the simple fact that each body of water will have its own personality.  And that my friends is fun to figure out.  There are some fisheries where we often find crappie on rock structure for example and yet other lakes or reservoirs where we find fish using locations that might seem unusual.  Not only do crappie respond to the environment and structure (or lack thereof) but fish also respond to the fish community present.  On lakes where there are a lot of large bass or a high density of walleye, you will notice some tendencies (burying in weeds during daylight or not using rock structure for example) but you will also notice differences if there are not the other predators present in high numbers.

From Canadian Shield lakes to natural lakes across the upper Midwest, many of the predominate patterns are basin related or weed related.  Good stands of green weeds like coon tail hold fish especially if those weeds are situated along a sharp break or off a point that is close to a basin or hole.  Perhaps the most classic pattern involves suspended schools of fish that roam out over the hole or basin.  There are so many great fisheries however where you can throw this knowledge right out the window.  Past seasons, we filmed different episodes on fisheries that probably don’t follow the norm of what is so often preached about winter crappie.

Shallow dish bowl lakes and lakes that lack classic structure often fish much differently.  Case study is Lac que Parle in south west Minnesota.  We filmed an episode on this shallow fishery this past season, headquartered out of Watson Hunting Camp.  This long shallow lake is perhaps fourteen feet at the deepest but there is very little structure.  The fish roamed along vague contour edges that slowly dropped from the shoreline out into massive eight to ten foot flats.  Finding fish resembled the hole drilling that is sometimes required to find perch over large expansive flats.  Pods of fish seemed to follow lines where the goal was to just get over the flow of fish where you marked small schools of fish moving through in fifteen minute to half hour intervals.  We have seen this vague pattern play out before on similar fisheries where the sweet spot wasn’t so much an individual piece of structure or even a magic depth.  The fish seemed to roam an expansive edge where if there was one universal pattern, it was a distance from the shoreline.  Might be fifty yards or two hundred yards depending on the depth and taper of the bottom.  That lesson is a lesson you can take to the bank on shallow, flat fisheries and the distance from the shoreline lesson just doesn’t apply to crappie.  We have used that rule for figuring out perch and walleye movements on similar fisheries. 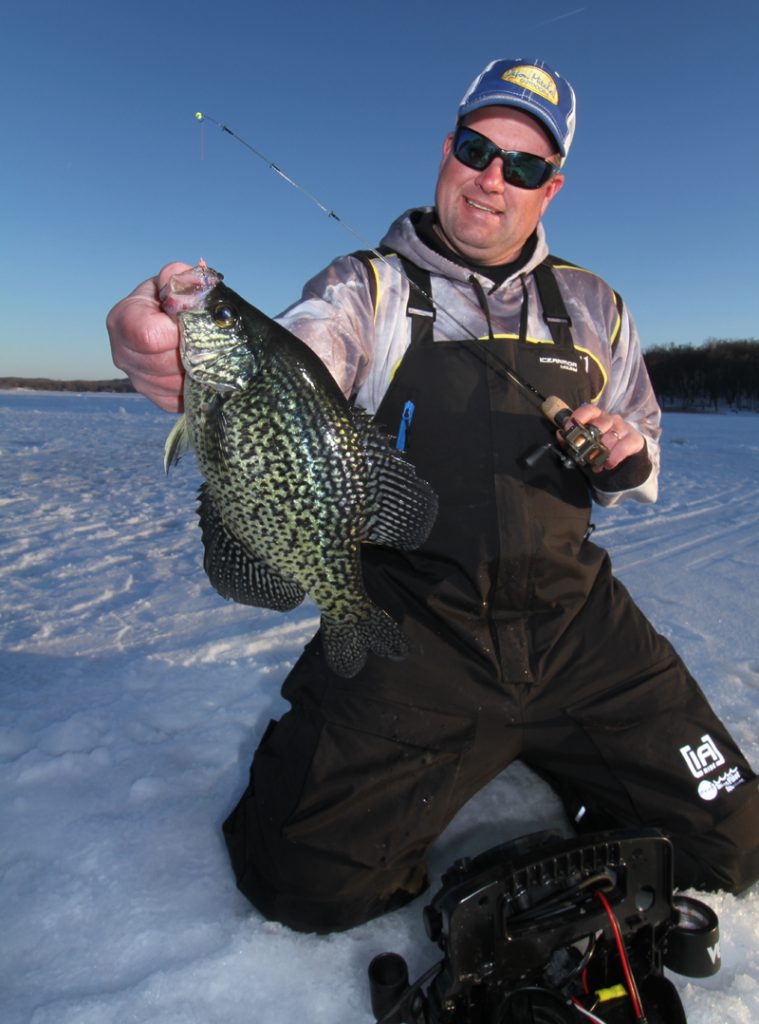 Jason Mitchell shares some varied patterns and locations for catching more crappie through the ice this winter.

Reservoir crappie patterns don’t get a lot of ink either.  There are great reservoir crappie fisheries located in the Great Plains States of the Dakotas, Iowa, Nebraska and northern Kansas.  Because these reservoirs often cycle much more with water levels, the fishing can be boom and bust but the boom years are special.  Pipestem Reservoir and Jamestown Reservoir located in central North Dakota both offer solid crappie fishing.  We recently filmed an episode on Pipestem Reservoir with guide Jerad Newgard.  We have also filmed crappie fishing episodes on the upper end of Lake Oahe near Beaver Bay with Curt Reeff.  Lake Oahe might be producing some of the best winter crappie fishing in the upper Midwest for fish over thirteen inches.  Reservoir crappie fishing is often about reading structure if there is a defined river channel or creek channel present.  When we filmed on Pipestem for example, we found fish on the edge of the old creek channel where the channel swung close to the shoreline.  Any curve or split has potential and in the case of Lake Oahe, any flooded brush or flooded tree near or along the old channel can be worth checking.  You can find brush or trees by drilling holes and using your flasher but the fast and easy way is to explore these locations during the open water season and use side imaging in a boat.  Large trees will also sometimes emit a gas where you can actually see the large white bubbles frozen into the ice particularly at early ice before there is snow.

Merritt Reservoir located in the Sandhills of Nebraska also offers the classic river channel submerged tree patterns but what makes Merritt somewhat unique is just how big and tall some of the trees are.  We found crappies suspended off enormous cottonwood trees along the deep channels in water as deep as thirty feet.  Many of these trees had been under water for several decades.

Regardless of reservoir, any tree or bush near structure can hold fish and a good bush or tree is relative to what is available in the area.  On some reservoirs where there are few bushes or trees underwater… any bush or tree near the channel is a really good tree or bush.  On reservoirs where there is an abundance of bushes or trees underwater, the best locations have bushes or trees with horizontal branches or some type of crown.  A lone tree stump with no branches can hold fish but a tree stump that still has branches is often better.  As a rule of thumb on so many of the reservoirs we have fished, you don’t have to physically fish in the branches or right on top of the tree.  If there is enough of a gap between branches,  you can but we often catch more fish by drilling holes right next to the branches, five to ten feet to the side.  Which side can be determined by how the channel runs and if there is current.  What can be surprising in some reservoirs is just how much current can move through these spots.

Obviously you have to figure out how high the fish are suspending.  Most of the time, a good starting point is near the top of the crown for the more aggressive fish.  What often doesn’t get mentioned is how to fish the current.  On many reservoirs, the current will pulse.  That is the current will pick up and drop off.  There might be an hour where you have a hard time picking up your lure on some reservoirs because the current is strong enough to push your lure out of the cone angle of your sonar.  Than the current might lay down for an hour.  This surge might happen every hour or every three hours.  We often see an intense bite window right at the beginning or end of the surge.  Sometimes, you have to just set up on good location and play these current windows.

If there is a universal location that can really turn on for reservoir crappie… away from the old creek or river channels, that location is any valley or dip along the shoreline that funnels runoff at late ice.  Look at the shoreline and look for the high banks, than look for the low bank in between where there is a dip or valley.  Any terrain feature along the shoreline that focuses some runoff at late ice especially if it is near any flooded brush, trees or an old channel is a spot to mark.  The later the ice the better and we often find crappie running shallow and often right under the ice.

The beauty of fishing is there is no one size fits all formula for attacking every fishery.  There is no rubber stamp pattern that can be applied everywhere.  You can take the exact same fish and put that fish in a different environment and discover completely different patterns.  So often as anglers, we can get in a rut where we learn a successful pattern in one particular ecosystem and then struggle when we encounter new water.  Make a point this winter to figure out a fishery that fishes much differently than water you are much more intimate with and you will become a much better ice angler… I also guarantee that you will also have a lot of fun.