In past articles, we have shared some effective trolling tactics that incorporate the use of a bow mount trolling motor.  Particularly early in the year, creeping along with a bow mount trolling motor to pull crankbaits is simply deadly particularly in shallow water or when slow speeds are critical.  Using the bow mount trolling motor is also more precise to steer and stay on tight contours and by pulling the boat from the front, tight turns are also easier.  Many anglers set the speed or compensate for wind or current with a kicker motor on the transom but steer from the bow with the electric.  There are many advantages to all these tactics but as summer moves along and the sun begins to bake… something else begins to happen.

I have found over and over that mid to late summer walleye often respond to different types of triggers.  Fish react and respond much differently in early August than early June.  Early in the summer for example, fish might not let you drive over the top in six feet of water.  Mid to late summer however, you can often catch fish right below the boat much easier.  Fast speeds also become a trigger.  Amazingly, big motors rumbling and big props turning can also sometimes become an important part of the presentation.  When surface temperatures climb into the low eighties, the heat often coincides with more algae in the water which often gives the water an additional stain.  I personally believe a couple of things happen, the stain or color in the water lets you get away with more in regards to driving the boat over the top of fish but also the heightened level of metabolism that coincides with hot water temps seem to put walleye over an edge where they become so aggressive that they almost seem fearless.

Dog days of summer often creates an image of deep fish and no doubt that some if not many walleye can be deep on many systems but there can be some tremendous bites happening up shallow on some of the hottest days of the summer.  Something I believe that happens a lot in mid to late summer as the water begins to layer and set up with thermoclines or at least concentration baitfish that require either cool water or highly oxygenated water is a reversed feeding window where fish slide deep over open water to eat and then move up shallow to warm up and speed up their metabolism.  Regardless of why some walleyes decide to lay in six feet of water when surface temps are baking come the hottest days of summer, prop wash trolling can often trigger these fish.

What I find amazing is some of the nuances for this type of fishing.  Typically, you can throw any type of finesse right out the window.  Cast to these fish… nope.  Slide by the fish with the electric trolling motor… nota.  You can literally pull your hair out trying to catch these fish.  Run over the top of the fish however with a big motor rumbling while a fourteen-inch stainless steel prop turns literally three feet over the top of the fish at a clip of three miles per hour and BANG.  Some of the most violent strikes you will ever see from a walleye.  Why and how?  I can only guess that there are times when the fish are so cranked up that a prop actually attracts the fish and the turbulence created by the big prop is a trigger.  Have seen this shallow water phenomena over and over.  Putting a deep diving crankbait on a short leash right behind the prop at a blazing speed in less than eight feet of water has produced a lot of big walleye for me over the years.

Here is also what is crazy in my opinion.  Try revving a long with a kicker motor at three miles per hour and catch a few fish.  Rumble along with a big outboard at three miles per hour and catch even more.  I know nobody wants to rack up hundreds of hours onto a big primary motor while trolling but there are times when the big prop turning right over the top of fish just lights them up.  The prop obviously still has flash just turning in the water in neutral so the turbulence created by the prop must also be a factor.

I have caught fish as close as ten feet behind the boat and have also caught fish while letting out line but the sweet spot seems to be fifteen to twenty feet behind the boat.  Deep diving cranks like Salmo Free Diver 9, Salmo Sting DR, Rapala Jointed Shad Rap, Reef Runner Little Ripper, Bomber Long A, the old-style metal lipped Hot n Tot and Salmo H5F Hornets have all been deadly lures with this tactic.  This isn’t a situation for shallow billed jerk baits or subtle vibration lures.  The basics are put a deep diving bait on a short amount of line right behind the boat.  Burn that lure fast through five to eight feet of water and hang on.  When walleyes hit the crank in this situation, you will often tell yourself that the strike and initial fight is too violent to be a walleye.  These walleyes will impress you.

What also typically happens as this pattern develops is massive algae blooms.  Several burner hot days with little to no wind where you feel like you are baking all day in the boat.  What ultimately happens is the algae will start to collect at the surface of the water and can almost develop a crust that has an unpleasant smell and is very unappealing.  As this algae bloom gets really bad, trolling crankbaits can become impossible because the slime simply slides down the line onto the bill of the crank, fouling it up.  A few things I do to combat the algae fouling up lures is to angle the rod tips down into the water so the algae collects on the rod tip instead of sliding down the line.  What can also help is using a fluorocarbon leader that is twice as heavy as the braid you are using for your primary line.  Connect the two lines with a big ugly surgeon knot or leave the tag ends long on an alberto knot and the knot will also collect some of the algae.

There comes a point however where the algae can get so bad that you can no longer troll crankbaits effectively.  When algae slides down the line so much and fouls up the lure, I have also had success running a big three-ounce bottom bouncer at fast speeds right behind the boat with a crawler harness.  The key to getting the harness to run without twisting for me is to tie the harness with heavy twenty-pound mono and using the plastic quick change clevises as they seem turn better on the heavier line.  Typically upsize the beads and use a deep cup Indian Blade for the faster speeds.  Both crawlers and Gulp! work well but often like how Gulp! lifts the harness up at the faster speeds.  When trolling harnesses at fast speeds right behind the prop, I find that by curving the Gulp! crawler with the two-hook crawler harness often triggers bigger fish.  The curved worm swims and zig zags through the water and small fish just seem to have a harder time getting their mouths around it.  The harnesses behind the heavy bottom bouncer becomes my go to over cranks when the algae is at the very worst.

There are a lot of reasons why walleye can be up shallow during the dog days of summer and what I find on many lakes when algae begins to crust up on the surface is a tale of two extremes.  Seems like fish are really deep over classic rock structure or surprisingly shallow right under the crud.  What amazes me about these speed trolling tactics in shallow water is the effectiveness in that you can really struggle but by simply using the big prop and fishing fast, the results can be dramatic like a light switch.  This tactic hasn’t worked for me in shallow water that was really clear but in dirty water… the prop wash fishing can be effective during the dog days of summer. 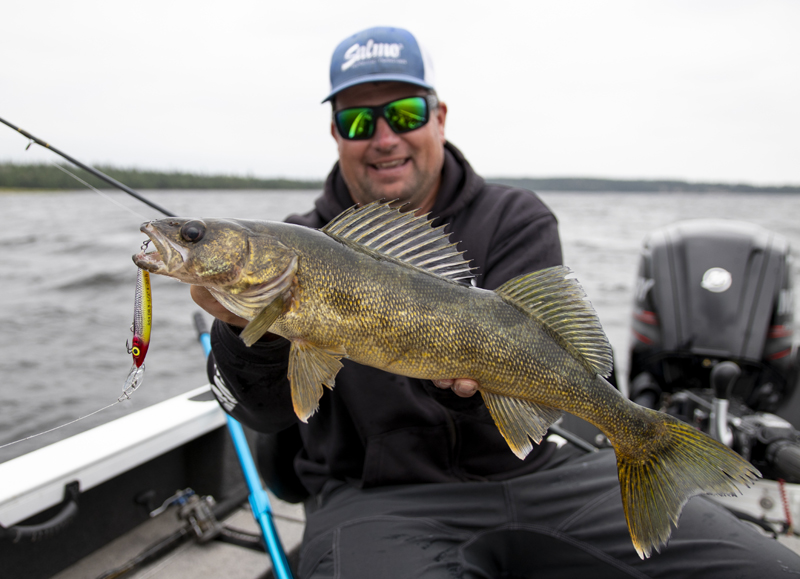 Running deep diving crankbaits like the Salmo Sting DR on a short leash right behind the prop can be a deadly walleye tactic come mid to late summer.